A Hellion in Her Bed by Sabrina Jeffries 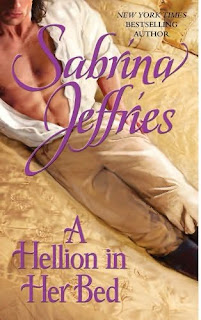 
A Hellion in Her Bed (Hellions of Halstead Hall #2)


Book Blurb:
Furious at his grandmother’s ultimatum to marry or lose his inheritance, Lord Jarret Sharpe wagers his luck—and his heart—at the card table against a most unlikely opponent.Mired in scandal after his parents’ mysterious deaths, notorious gambler Lord Jarret Sharpe agrees to tamely run the family brewery for a year if his Machiavellian grandmother rescinds her ultimatum that he marry. But the gambler in him can’t resist when beguiling Annabel Lake proposes a wager. If she wins their card game, he must help save her family’s foundering brewery. But if he wins, she must spend a night in his bed. The outcome sets off a chain of events that threatens to destroy all his plans . . . and unveils the secret Annabel has held for so long. When Jarret discovers the darker reason behind her wager, he forces her into another one—and this time he intends to win not just her body, but her heart.

I didn't find this book 2, A Hellion in Her Bed as good as the first book, The Truth About Lord Stoneville.  At the same time, I was a really great book.

Jarret's grandmother becomes ill and releases him from the ultimatum she placed on Jarret regarding the demand to get married....only if he will run Plumtree Brewery. This decision gave Jarret the purpose he needed to move passed his wastrel life. Although he reluctantly took over charge at the brewery at first, it quickly became obvious that he really did knack the true business sense to operate the company. When Annabel takes a gamble on her future and approaches Jarret to help, their chemistry was instant.  Their charm may have been compatible but both were quite devious. Annabel with her salacious wagers and Jarret thinking with his lower brain.

It is obvious that Sabrina Jeffries did a lot of research for this book. I really appreciate when I read about a certain time period (1825) I can trust what I read. The Plumtree and Lake Brewerys were fictional but she combined in a great historical account regarding India Pale Ale and the shipping export business. I love it when I leave a book with some account of true facts on the period. It just gave the entire story such validity.

Annabel sure lied her way through A Hellion in Her Bed. It was becoming a dangerous slope for her to follow and she needed many others to back her up with all the lies. I realize that she did what she did to save her family and company but I still felt bad for Jarret that she was being so deceptive. Now Jarret was no angel either by accepting her wagers and also holding back on his own personal history so really the two were quite a match. I did adore how well the pair were suited for each other and they were both so clever and knowledgeable about their business. It is always a pleasure to read about women of industry in that time period. It was so rare.

I wished we had more interaction with the other siblings in A Hellion in Her Bed. I think that is what I missed about this story compared to The Truth About Lord Stoneville.  The family dynamic in this story was more on Annabel's side. I am hoping that when I start How to Woo a Reluctant Lady next (and I am starting right now) that there is more of the Sharpe family. I missed his grandmother too. She is a scene stealer for me.

I liked the idea that Sabrina Jeffries created a mystery to link the books together more closely. Instead of each book being about a couple match up, there is more to the story to keep the reader coming back. I think with each book more clues get revealed. I would like to see how it all links together. So for that reason, I would not recommend Hellions of Halstead Hall as a stand alone books but rather to be enjoyed from first book to last. 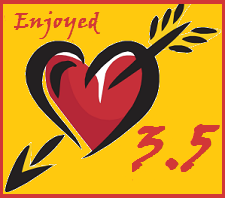