The Scottish Prisoner by Diana Gabaldon 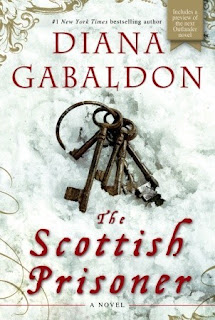 
Book Blurb:
London, 1760. For Jamie Fraser, paroled prisoner-of-war in the remote Lake District, life could be worse: He’s not cutting sugar cane in the West Indies, and he’s close enough to the son he cannot claim as his own. But Jamie Fraser’s quiet existence is coming apart at the seams, interrupted first by dreams of his lost wife, then by the appearance of Tobias Quinn, an erstwhile comrade from the Rising.  Like many of the Jacobites who aren’t dead or in prison, Quinn still lives and breathes for the Cause. His latest plan involves an ancient relic that will rally the Irish. Jamie is having none of it—he’s sworn off politics, fighting, and war. Until Lord John Grey shows up with a summons that will take him away from everything he loves—again. Lord John Grey—aristocrat, soldier, and occasional spy—finds himself in possession of a packet of explosive documents that exposes a damning case of corruption against a British officer. But they also hint at a more insidious danger. Time is of the essence as the investigation leads to Ireland, with a baffling message left in “Erse,” the tongue favored by Scottish Highlanders. Lord John, who oversaw Jacobite prisoners when he was governor of Ardsmiur prison, thinks Jamie may be able to translate—but will he agree to do it? Soon Lord John and Jamie are unwilling companions on the road to Ireland, a country whose dark castles hold dreadful secrets, and whose bogs hide the bones of the dead. A captivating return to the world Diana Gabaldon created in her Outlander and Lord John series, The Scottish Prisoner is another masterpiece of epic history, wicked deceit, and scores that can only be settled in blood.

In all of my book reviews that I have written, I've never reviewed a Diana Gabaldon book. She is my writing hero, my author idol and her books are the go to books where I need an outlet to be transported away from real life. (check out my Fan Girl page if you don't believe me) I feel that I could never do her books justice and explain in my own amateur words how amazing her writing is and how much I adore her work. Can I convey that in a mere book review? Well, I'm going to try with The Scottish Prisoner.

The Scottish Prisoner is not a sit down in one day and read a book novel. The hardcover is over 500 pages and I absorbed every_ last_ word. Diana Gabaldon books are not published frequently so there is no need to rush. This week while reading in the evening, when it was late and time to place in my bookmark, I'd look up and half expect to glance around and see that I'd been transported back in time. There were no candles lighting my bedroom and there were no maids scurrying in to start a fire. Her writing literally makes me feel as though I am there. She is so descriptive with scents, sounds and settings. I love how Diana Gabaldon does this to the senses and not with an overflow of overused regular adjectives. The descriptions are more real.

Case in point >> Lord John and Jamie Fraser are sitting together in a greenhouse talking. Lord John takes a moment to think of what his next words will be and in the middle of his pause the reader is treated to this addition to the moment...

“The grapevines had been cut back for winter, but the new spring growth was well sprouted, delicate rusty leaves deckling the rough-knuckled vines the roped through the arbor. A faint draft moved through the rich air of the glasshouse, ruffling the leaves.”


And then the conversation between the men continued. I swear I am there with them. I am sitting in one of the basket chairs that they collapsed into and I am right along side of them. I can smell the earth and dirt. I can feel the breeze and pull my blanket around me more. We are treated to additional bits of setting moments like this throughout the book. It not only adds to the conversation but it deepens the reader's relationship with The Scottish Prisoner.

As for the actual story of The Scottish Prisoner. It was marvelous. I enjoyed every one of those 500+ pages.  Out of all the Lord John books I have read, The Scottish Prisoner is my favourite. I am sure that Jamie Fraser being a lead protagonist added to that love but truly the story itself was very engaging.

I loved reading and having more insight of Jamie's time at Helwater, England.  Experiencing those sacred moments that Jamie had with is son, William was worth The Scottish Prisoner alone. I felt the helplessness of Jamie not having any say into William's life but how much he treasured those gracious moments he was able to get. He would have made a wonderful father if he had the chance to have raised William (and Bree for that matter) I adored reading how calm he was and the route he always took when Willie was acting out his two year old spoiled self. No wonder Willie was so drawn to "Mac". He needed that strong male that he could hero worship towards.

Lord John is such an amazing and complex character. He treats Jamie as an equal and you know he feels torn that he has to continue to hold Jamie as The Scottish Prisoner. He'd much rather be friends and he battles himself daily on the feelings he carries for Jamie. This moment below is so touching and is a huge milestone between Jamie and John. Diana chose it as an ending to chapter. The double meaning of it being a chapter ending was not lost on me.

I can't even imagine the amount of research that goes into any of these historical books. Diana Gabaldon takes real events, historical people and true materials of the day and weaves them into a fictional story that mesmerizes the senses. Every moment, every step of the story is a set in motion for the reader to journey along believably. Quite honestly, The Scottish Prisoner was an outstanding book and I adored every adventurous moment through Ireland and England. I think I want to go and re-read Voyager again. I want to read about Jamie and Claire's reunion. I need to.


Well how did I do? Did I do The Scottish Prisoner justice?


Teasers: "Christ, Sassenach. I need ye.", The Wild Hunt, another prison escape (but this time is is Lord John that is busting out), "I a bonnie lad!" 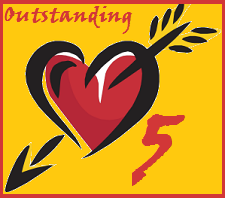 Excellent review! I know what you mean about trying to do her books justice in a review--it's so difficult to sum up just what makes these books so special, as there is _so_ much to convey!

I too love her descriptions, and the way she weaves the details of setting into the larger action (FWIW, she calls it underpainting, which I think is a lovely, evocative term).

This is one of those books that I'm going to have to let sit for a bit, and then re-read it later. I've recently started listening to the audiobooks, and I may have to get this on audiobook so I can listen to it for my next read!

Thanks for stopping by and taking the time to comment. I really appreciate it. I love when someone has just read the same book as me and we get to compare notes.