How to Flirt with A Naked Werewolf by Molly Harper 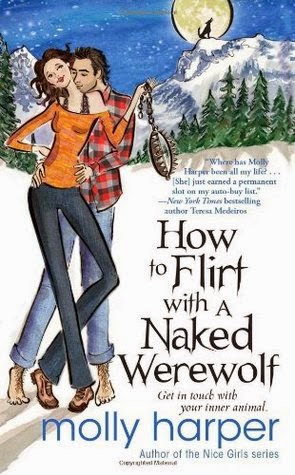 Book Blurb:
Even in Grundy, Alaska, it’s unusual to find a naked guy with a bear trap clamped to his ankle on your porch. But when said guy turns into a wolf, recent southern transplant Mo Wenstein has no difficulty identifying the problem. Her surly neighbor Cooper Graham—who has been openly critical of Mo’s ability to adapt to life in Alaska—has trouble of his own. Werewolf trouble. For Cooper, an Alpha in self-imposed exile from his dysfunctional pack, it’s love at first sniff when it comes to Mo. But Cooper has an even more pressing concern on his mind. Several people around Grundy have been the victims of wolf attacks, and since Cooper has no memory of what he gets up to while in werewolf form, he’s worried that he might be the violent canine in question. If a wolf cries wolf, it makes sense to listen, yet Mo is convinced that Cooper is not the culprit. Except if he’s not responsible, then who is? And when a werewolf falls head over haunches in love with you, what are you supposed to do anyway? The rules of dating just got a whole lot more complicated. . . .

Molly Harper wins for the best opening line ever:

"WHEN A NAKED MAN shows up on your doorstep with a bear trap clamped around his ankle, it’s best just to do what he asks."

I was introduced to Molly Harper's writing with her "Nice Girls" vampire series. Very much like that other series, this Naked Werewolf series is witty and was sure to guarantee me lots of smiles. She has such great lines.

"Well, that cinched it. He was an asshole. I was definitely going to end up sleeping with him."

Molly Harper writes such personable female characters. She makes you want to be their best friend and hang out with them. Mo was just like that; totally cool. Mo's birth name is actually "Moonflower Freedom Refreshing Breeze Joplin Duvall-Wenstein."  Wow that is a mouthful so it was shortened to just, Mo. How to Flirt with A Naked Werewolf is a feel good book. I loved it because there was not a long and drawn out conflict between Mo and her love interest, Cooper. They met. They were physically attracted to each other but they didn't like each other. They overcame their hostility and started dating.

There are murders happening in Alaska around their area and it appears that the deaths are caused by a rouge wolf. Being as Cooper is a werewolf and he seems to have secretive baggage, Mo needs to work through holding his secret wolf identity or sharing that information with the authorities. It weighed heavy on her conscience and I felt bad for her.

I purchased How to Flirt with A Naked Werewolf on a super Amazon deal which is sadly over. I'd love to continue with the series but they are too pricey on ebooks for me. I will have to see if my library has them to lend.

Ah yes. Love her! This series is my favorite of hers but I liked the contemp I read of hers as well. I haven't finished up the vamps yet but maybe one day :) Glad you enjoyed it. I'm totally with you on liking her heroines :)

Ah yes. Love her! This series is my favorite of hers but I liked the contemp I read of hers as well. I haven't finished up the vamps yet but maybe one day :) Glad you enjoyed it. I'm totally with you on liking her heroines :)