Entice Me at Twilight by Shayla Black 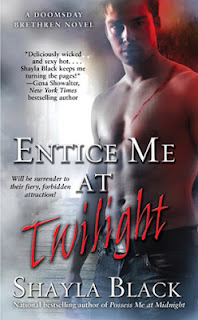 Entice Me at Twilight The Doomsday Brethren, Book 4

Book Blurb:
Dangerously handsome Simon Northam, Duke of Hurstgrove, and his uptight brother Mason are hardly close, but crashing Mason’s wedding and stealing his fiancée further aggravate their sibling rivalry. Duke’s family has no notion he’s a wizard, so how can he explain that magickind’s fate lies with the beautiful, tenacious bride he longs to seduce? Felicia is an

Untouchable, a rare human whose presence disables magic—even the impenetrable forces surrounding Morganna le Fay’s tomb. The evil witch’s malicious powers could propel nefarious wizard Mathias to ultimate world domination . . . if he can resurrect her. To conceal herself, Felicia must succumb to her smoldering desire for Duke, but he risks binding his life—and sanity— to a lover whose loyalties are forever torn. He faces a choice: betray his brother for ultimate survival . . . or lose the woman who tempts him beyond control.

All I can say is thank gawd Shayla Black put in a bit of a teaser of Embrace Me at Dawn (book 5) at the end of Entice Me at Twilight. Otherwise I just might have filled her Twitter feed begging for answers. Whew, she took pity on her readers and shared a bit of what’s to come. Instead of dying of angst, I am giddy with anticipation so that’s a way better to go.


Since Entice Me at Twilight is a part of an ongoing exciting Doomsday Brethren series, the book does end with some unanswered questions. If someone were to ask me if Entice Me at Twilight could be read as a stand-alone I’d have to scratch my head and think about it. I would say no. There’s just too much of a back story to really grasp it all. You’d need to understand the beginning. Beside the first book, Tempt Me with Darkness still remains my favourite of the series so you’d be starting out at a great beginning. So my review is written as if you have read the series from the beginning so I don’t have to explain the complicated history.


I want to start off this review talking about Simon Northam, Duke of Hurstgrove. I have loved him since the first book. He’s classy, easy going and honest not to mention that I melt a wee bit when he talks. Ok let’s discuss this “honesty”. Well thank God he is honest because he’s the only man in the world that is now mated with a woman who can tell with 100% certainty if a person is lying or not. Felicia is a rare human called an Untouchable and one of her gifts is knowing when someone is speaking the truth. I found it interesting that none of the other Doomsday Brethren teased him about that fact.  I don’t think many men would be too excited that their mate for the next 1000 years will know every single time if he is telling the truth or not. Yikes! I wouldn’t like that if my hubby had that ability.


Felicia’s other ability is rendering a witch or wizard magically useless while in their presence. That would be a bit scary for the Doomsday Brethren as well so it will be really interesting reading in the next book the complications that ability causes.


I wasn’t a big fan of Felicia. She frustrated me and she certainly came off being weak. I am personally drawn to flawed yet kick ass girls. The other part that I struggled with was the Doomsday Brethren, male and female mates, not giving her full details regarding the mating. So on one hand, I was frustrated that she was hesitant about Simon and his intentions and then on the other I was frustrated why nobody would explain the magical culture to her more. Bram finally did later when they were in peril but I was angrier that he hadn’t shared it with her earlier. So I was mad at someone many different times in the book.
I loved the little snippet Felicia offered us into the Bram's mate, the mysterious Emma. I am very curious about that. *ponders*


Entice Me at Twilight was an excellent addition to this great Doomsday Series. I loved Simon and Felicia’s private moments and it was great to see Simon fall totally in love. Mathias, the villain is still the baddest bastard around and his cruelty remains as vicious as ever.
Shock was different in this book. I think he talked more in this book than in any of the other books. He seemed like a different character however he remains just as confusing as ever. I really don’t know what side he's on. Shayla Black has done a phenomenal job keeping the readers at bay regarding Shock. I had a feeling in this book that he is on the Doomsday Brethren side more and it's tearing him up being a double agent. Drowning himself and his emotions in alcohol was definitely a character adjustment for him. The Shock, Lucan and Anka love triangle is going to be so interesting to read. *rubs hands together* I honestly have no theories how it will all end up. If you are a fan of the books, I’d love to hear your thoughts?


2012 is a long time to wait for the next book. Maybe I still will fill Shayla Black’s twitter feed begging to read an ARC. Hee hee

I have had the first three books of this series in my book closet for EVER! I really need to get to them...especially since it seems they keep being good. Nice review!

Thank you! That is really cool that you have 3 of them already. I love reading a series of books back to back one after the other. Enjoy!