Kiss of Snow by Nalini Singh 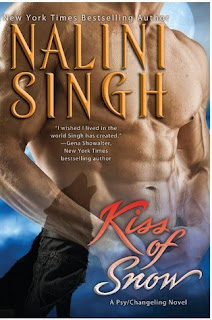 Book Blurb:Since the moment of her defection from the PsyNet and into the SnowDancer wolf pack, Sienna Lauren has had one weakness. Hawke. Alpha and dangerous, he compels her to madness.

Hawke is used to walking alone, having lost the woman who would've been his mate long ago. But Sienna fascinates the primal heart of him, even as he tells himself she is far too young to handle the wild fury of the wolf.

Then Sienna changes the rules and suddenly, there is no more distance, only the most intimate of battles between two people who were never meant to meet. Yet as they strip away each other's secrets in a storm of raw emotion, they must also ready themselves for a far more vicious fight…

A deadly enemy is out to destroy SnowDancer, striking at everything they hold dear, but it is Sienna's darkest secret that may yet savage the pack that is her home…and the alpha who is its heartbeat.

Oh wow. Just wow. I think Kiss of Snow is maybe my favourite of the Phy-Changeling series. If I could grant higher rating than 5, I'd do it. I literally just finished it and I want to go back and re-read it right now. So much good stuff happened in Kiss of Snow.


Without revealing spoilers, the things that stuck out for me in Kiss of Snow are listed below.


I totally loved the build-up of Hawke and Sienna becoming a couple in Kiss of Snow. It was so worth the journey. Sienna is a great combination of being young at 19 yet mature beyond her years. It was a great display of age balance. She acted young and immature with trying to make Hawke jealous (such a young person’s approach) yet so mature with her knowledge of military tactical maneuvers. I also loved how slowly Nalini Singh built up their intimate coupling but wow, when they did get together it was some powerful let me tell you!

The Pure Phy war climax in Kiss of Snow is spectacular. I read it so fast that this speed is one of the reasons I want to re-read it again so quickly after finishing. I was clicking my pages so fast because I couldn't absorb it fast enough. Simply excellent!

The X Phy ability is very mysterious. Even for the Phy society the X Phy are a bit of an unknown. Judd and Sascha were trying really hard to research any information about the X but it seems the only known information about X was researched by a human scientist over 100 years ago. (Very interesting how they solve that problem)

IMHO, Kaleb is the ghost & is looking for Sahara (sp?) Nightstar (Faith's F-Psy cousin who went missing a few years back). I think Kaleb fits the most, considering all the characters we have been introduced to thus far. Otherwise, the ghost might be a completely new character but I'm still going with Kaleb. Previously, I thought the ghost might have been Vasic but something in KOS told me that didn't add up anymore (some comment Aden/Judd made). I'm also pretty sure Kaleb is the one who saved Annie from that train crash or whatever in Stroke of Enticement.
~T.L.

At one time I wondered if the ghost was a girl. But since there was mention of one girl the ghost kept an eye...I kinda dropped that idea.

I've also thought it might be Kaleb Krychek but after Kiss of Snow don't really think it's him either.

I'm not really sure who the ghost is now. I do want to read stories for Vasic, Kaleb and The Ghost.

I'm team Kaleb. In KOS the Ghost talked about going to places in the Net no one else could go and that in particular fit Kaleb. I've gone back through all of the books and looked at each of the mentions of the Ghost as well as Kaleb and there is just too much similarity. I also have the impression, although it has never been said that the Ghost can teleport.

I've always believed and wanted Kaleb Krychek to be the Ghost. Jane L from DearAuthor put a wonderful post on why she thought Kaleb is the Ghost as well: http://dearauthor.com/features/letters-of-opinion/theories-on-kaleb-krychek-the-man-the-mystery-the-romance/

Her list is so detailed, it's scary. Anyway, I still believe Kaleb is the one and I'm sticking to it.

Thanks for commenting and offering your opinions.

TL - wow I love your thoughts. That would make an awesome book for Kaleb on it's own.

Beth I never even considered the Ghost to be female so that is a wonderful angle.

I had a few thoughts. I orginally thought it was Kaleb or Vasic but then in Kiss of Snow, the Ghost admitted that Judd knew who he was but not seen. I am sure a strong Arrow like Judd would know what Kaleb would look like and of course he knows Vasic.

This is my new guess. I am totally throwing this out there. What if it was Sascha's biological father? Nikita's sperm donor? I thought that would be an awesome twist but then I swayed away from it. I don't know why but I did.

mbot565 - I am going to totally check out that link so thank you very much for sharing!

I can't wait to read Tangle of Need and see more I hope of these two!!!