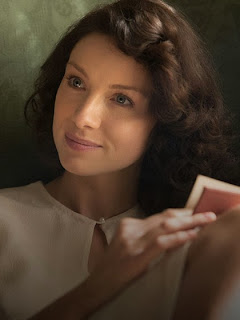 
Is she not the most perfect looking Claire ever?
Caitriona Balfe certainly has the look of Claire and I personally can't wait to see her act the role. I've become to adore her on Twitter. 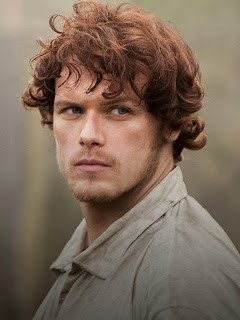 Oh Jamie *sigh* Oh Jamie! Sam Heughan has won me over and over and over for being the absolutely perfect Jamie. I've seen him now in two other acting roles and I just know he is going to nail Jamie Fraser for us devoted fans. He has "the look" and he definitely has the personality. I have this shot as my iPhone lock screen picture and my texting sound is his voice saying "Sassenach...say it with me." I am totally smitten with Sam. 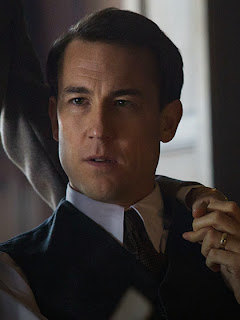 I have to also include a picture and a comment about Frank Randall here. Tobias Menzie, who is cast as Frank, is hot! No wonder Claire was trying so hard to get back to him. He looks so sophisticated and gentlemanly in this picture. I love how the photographer ensured that Frank's wedding ring was present in this picture. I have to admit that I never really formed a picture of Frank's appearance in my head but Outlander Starz has really nailed these casting roles.

STARZ - Outlander - A STARZ Original Series: have treated their fans just excellent since day 1. We have been one lucky group of fans to have been granted access (via Twitter) to the stars themselves, the costume department, their amazing writers and even the genius behind it all, Ron Moore. If you don't have Twitter but do have Facebook, there are literally a plethora of fan sites set up that share all the daily news. I really like Outlander Fans , there is of course the Outlander Starz page and if you really want to be engaged in all things Outlander including books I recommend My Outlander Purgatory and Outlandish Observations as my two favourites.

If you want to see more of the cast in costume, just click on this link and enjoy! I for one am a very happy fan!

Oh, wow! They are definitely Clare and Jamie! I am getting more and more excited for this everyday! :D

Me too! Love the cast pictures. I love the teasers and tidbits that they keep releasing.