To the Nines by Janet Evanovich 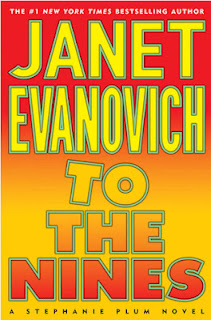 
Stephanie Plum's got rent to pay, people shooting at her, and psychos wanting her dead every day of the week (much to the dismay of her mother, her family, the men in her life, the guy who slices meat at the deli... oh, the list goes on). An ordinary person would cave under the pressure.
But hey, she's from Jersey.
Stephanie Plum may not the best bounty hunter in beautiful downtown Trenton, but she's pretty darn good at turning bad situations her way... and she always gets her man. In TO THE NINES her cousin Vinnie (who's also her boss) has posted bail on Samuel Singh, an illegal immigrant. When the elusive Mr. Singh goes missing, Stephanie is on the case. But what she uncovers is far more sinister than anyone imagines and leads to a group of killers who give new meaning to the word "hunter..."
In a race against time that takes her from the Jersey Turnpike to the Vegas strip, Stephanie Plum is on the chase of her life.

was an interesting storyline that involved dangerous on-line gaming, hilarious moments brought to us by Lula and teased the readers further along in the Morelli vs Ranger camp.


Firstly let me discuss the dangerous gaming. Wow what a cool plot line. It was interesting following poor Stephanie along the investigation. Of course my favourite part was having Ranger and Morelli switch off being body guards. What a dynamic relationship those three have.


This investigation took Connie, Lula and Steph to Vegas. Lula’s ranting on the plane kept me laughing so hard. I love that girl. I also thought it was hilarious to have Stephanie continuously searched by security. Although she was searched at random, you can’t help but wonder why she was picked. It may have something to do with how sexy she may have looked.

The way that Mrs Apusenja talks about Stephanie to her face left me wiping my eyes with tears. Calling someone slut to their face seems so humourous instead of the wickedness of talking behind one’s back.


OMG, Lula’s meat diet  was to die for. I kept re-reading those scenes and even read them outloud to anyone who was near by. Having Bob attach her purse while she was carrying around pork chops was hilarious. Just as an added bonus, Tank saw it all.


Okay so finally my favourite part of the Stephanie Plum books is the relationship of Ranger/Morelli and Stephanie. To The Nines

continues to satisfy my hearty love triangle appetite. Janet does a really good job letting the readers know that there is a difference with the type of love that Morelli feels for her than what Ranger feels. It is actually laid out for the reader if they don’t get it themselves by Stephanie narrating that Ranger and her have set boundaries. Stephanie’s boundaries are physical and Ranger’s boundaries are emotional.


It was really funny when Stephanie and Ranger are stuck in that apartment together with that mattress and all Stephanie can think of is how fast can she get out of there. She is certainly tempted.
I know I discussed lots of Ranger but there was a bit of Morelli too. He obviously loves her and I would guess that Stephanie has more than 30% of him as Ranger claims. The little tidbit in the book about Terry Gilman returning was another great side story to insert. Jealous Stephanie is so cute. It is the only time where I can feel her vulnerable.

Michelle, I keep meaning to tell you this but am always forgetting. Your TEASERS at the end of your reviews are genius! I totally wish I'd thought of doing that. ;) Love!

I've read this and was not able to really get into it...not my style of writing I guess...Great review it does make me think maybe I missed something when I read it. Thanks for stopping by the other day. Lisa