The Many Sins of Lord Cameron by Jennifer Ashley 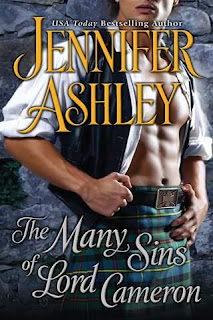 
The Many Sins of Lord Cameron (Highland Pleasures book 3)

Book Blurb:
A renowned rake, Cameron Mackenzie doesn't care if Ainsley Douglas has a virtuous excuse for sneaking around his bedchamber. He only cares that she's at his mercy. One kiss at a time, he plans to seduce her. But what starts out as a lusty diversion may break Cam's own rules.

I do love the MacKenzie men. I really enjoyed reading about their current life updates in The Many Sins of Lord Cameron. Although I have to say, every single time an update was shared about Ian (my favourite book) it had to do with Ian bedding his wife. Surly there has to be more to Ian than the constant nookie. Lord Cameron’s book was nicely set up for The Duke’s Perfect Wife, Hart Mackenzie’s book. (not due out until April 2012)

Ainsley Douglas was an extremely likable character. She was able to pull off this prim and proper façade yet when she was alone with Cameron, she was able to open up and be herself. She was smart and witty and played the part of a respectable widow remarkably well. Ainsley was someone I would want as a friend. Loyal when the time period seem to disregard loyalty as a top value. I do believe that was one of the main characteristics that drew her to Lord Cameron.

Cameron seemed like such a tragic character. I have to admit I was very confused by him. He seemed like an alpha male yet allowed his late wife to rule him emotionally AND physically. I found many of the things that she had done to him unbelievable. I guess I should say, I believe that she may have been crazy enough to try and do them but I do not believe that Cameron would let her get away with it. I just found it difficult to swallow. I realise that 18 years had passed from time she committed suicide until the present day but I still struggled with Cameron allowing it all to occur. I think I needed more evidence that Cameron would allow such atrocities to occur other than it was 18 years ago, he was young and allowed himself to be abused to protect his baby son.

I enjoyed reading about Lord Cameron and Ainsley coming together as a couple and I smiled at all the interruptions that kept preventing them from moving forward. I enjoyed the plot line conflicts and thought that they were creative diversions. I loved reading a bit more about Daniel and I hope that he does get his own book. He is a bit too young right now for marriage so it would make sense to age him a bit more.
I was hoping for a bit more excitement regarding Ainsley and Cam’s travels around the continent and I kept expecting something dramatic to happen. It felt like unwarranted angst built in.

Overall I did enjoy it but it was easy to put the book down and pick it up again. Regardless, I love this Mackenzie family and I did love The Many Sins of Lord Cameron. I will most definitely continue with the series and look forward to reading about the more mature Hart MacKenzie. Speaking of more mature, as much as I LOVE the cover it seems to portray a young man. With Cameron being in his 40’s, it would have been great to have a mature cover model. I know that author has no control over that but it would have been nice.

I loved the other books in this series.

Hi! I heard good things about this series and I'm looking forward to read The madness of lord Ian Mackenzie!

I'm a huge fan of this series - my fav in the series is the Madness of Lord Ian. I've just got a soft spot for him :)

GREAT review, you really caught the heart of the book!