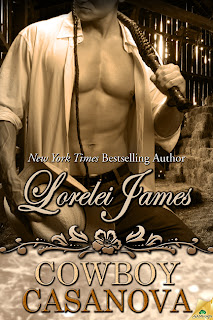 Book Blurb:
His rough touch makes her lose control… In Sundance, Wyoming, you can't throw a boot without hitting a McKay cowboy, so Ben McKay is used to fading into the background. Except on weekends, when he's Bennett, imposing Dom at The Rawhide Club, surrounded by a bevy of female subs eager for the attention of his long…whip. As for the curvy brunette eying him from across the room? He'll eat his Stetson if she's the experienced Domme she claims to be. Bennett offers her a deal—he'll let her call the shots for one night. But the next night he gets to prove to her how freeing it'll be when he takes the reins. Ainsley Hamilton is amazed by how well Bennett read her every secret yearning during that one explosive weekend—and she's stunned when they come face to face in their everyday lives as rancher and new bank president. Now Ben's urging her to explore her submissive side outside the club, and there's something in his commanding gaze that makes it too easy to let him take control—of her desires and her pleasure. Can Ben help Ainsley overcome her fear that a relationship built on dark sexual appetites won't survive the light of day?

Cowboy Casanova can be read as a stand alone book. I know sometimes when people see that it is the twelfth book in a series, that is the first thing they wonder.

Overall, I did like the book but I am wondering if I liked it because of the history I have with the McKay family. Would I love this book and rated a 4 star if I didn't know the entire history? Probably. But there were some issues that I had with the story to go along with the long list of things I did like.

One of the main issues I had with Cowboy Casanova was in regards to trust. Trust is one of the main central core workings of a D/s relationship. With Ben being as experienced as he was, I felt he didn't live up to his end of the bargain. He lied numerous times to Ainsley and he hid his growing feelings toward her. Yes I get that it wouldn't make such an interesting read if it was all sunshine and roses but the lies left me uncomfortable if not a bit frustrated. I did appreciate that Ben knew from day 1 what Ainsley's hard rule was and he never did brake that. (Even if he did use it to manipulate her by placing that one tail whip in her sight at a sensitive moment)

I liked Ainsley. A lot. She was a great woman who didn't dwell in the past regarding her ex-husband and held a responsible position as the president of Sundance's newest bank.  She knew she wanted more from a relationship and she was willing to give Ben a 30 day trial to see if being a submissive was her thing. I feel she gave it her all. She questioned a few things when she was uncomfortable but was always willing to give it a go. She kept her reserve and her emotions in check and was quite realistic.


Ok now the good stuff. The play scenes and the love scenes were sweltering hot. Each one was excellently choreographed, full of emotions and completely what you'd expect from the amazing writer that Lorelei James is. Her standard is so high that I usually can't read another erotic romance for at awhile afterwards because most other books just don't compare.
The dialogue was spot on, the descriptions and Wyoming scenery made me feel as I was right there and Lorelei James went ahead and planted seeds for further plot bunnies in future books. This is why I keep coming back to the Rough Rider series. As long as she keeps writing them, I will continue to keep buying them.

I also love that the Rough Rider series is based around the McKay family and she does include lots of family issues. They may be one huge family but they don't necessarily all get along as sweetly as most fictional families do. It certainly makes the stories that much more realistic.