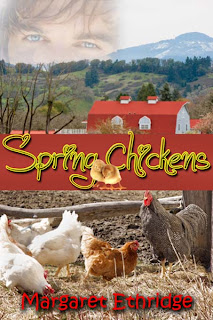 Mature Romance Week has been fabulous so far. Today it is about to get even better because today I am hosting one of my favourite authors, Margaret Ethridge.


I asked Margaret about Spring Chickens and the "maturity" of the couple and she so kindly wrote this piece for my blog today.

We’re sexy and we know it

I told a friend of mine that I was writing a book with a hero and heroine hovering around big 5-0, and she wrinkled her nose in distaste. Apparently ‘older people’ can’t be sexy. I pointed out that my own husband—the very same guy she once described as a hottie-hubby—is fifty-one, and she was forced to make an exception to the rule.

But who made the rule? Where did we ever get the idea that people forty aren’t sexy? Were we supposed to leave lust in the dust once after our first-annual thirty-ninth birthday?  Oops. Nobody told me.

And who decided that love was only meant for the young? George Bernard Shaw said the ‘Youth is wasted on the young.’ So true. They screw love up all the time. At least, I know I did when I was their age. Looking back on my twenties and thirties, I realize how much time I wasted anticipating and not savoring.

As I grow older, I come to appreciate those things younger people find so unattractive. To me, laugh lines, sun spots, and crow’s feet are symbols of a life well-lived. And a second, third, or even fiftieth chance to fall in love? In my opinion, that’s an opportunity too precious to waste.

You don’t have to be a spring chicken to fall in love.

The residents of Heartsfield, Arkansas think Lynne Prescott has it all. The wealthy suburban divorcee captures everyone’s attention when she blows into town to dispose of the family farm. But her nosy new neighbors don’t know she ran away from home.

Bram Hatchett’s interest in buying the land adjoining his farm is yesterday’s news, but the handsome widower’s inability to contain his attraction to the land’s beautiful owner quickly becomes fodder for the local gossip mill.

A rickety old porch and a disturbing decrease in the poultry population bring them together—but with wagging tongues and grown children against them, Lynne’s inclination toward flight comes smack against Bram’s aversion to fight. Can they whittle away the secrets of the past in order to scratch out a future together? 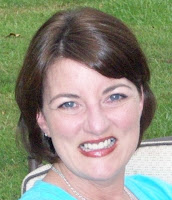 Would you like to win an ebook format of Spring Chickens?


Just leave your name and email address in the comments. All winners will be drawn Wednesday May 9th.

Thank you for visiting!
Check back on earlier posts from this week to view other great giveaways.
Come back on Friday for a chance to win a $50 gift card for the online bookstore of your choice.

So giddy to have you featured on my blog today! Your new book looks awesome and I can't wait to read it!

Thank you so much for hosting a guest post today and offering the giveaway. I hope a lucky winner becomes your newest fan like me!

Always a thrill to read anything you post, Margaret! I love this line: 'To me, laugh lines, sun spots, and crow’s feet are symbols of a life well-lived' because I SO agree. One of the things that appealed most to me about Spring Chickens were your characters. The fact that they're a little more seasoned than most romance novel couples made me love it all the more. They're real, and they're spectacular. :)

I loved Spring Chickens. I remember laughing when Margaret told me the story about a friend commenting about Bram and Lynne kissing and they were 50. Oh the horror.
Regardless of the age we should all be lucky to find love.
Bram and Lynne were great.

Thanks so much for having me, Michelle! I love that you're featuring heroes and heroines with a little life experience this week. :)

Julie and Laurie - You both make me incredibly happy.

I couldn't agree more Margaret- When I was younger, I didn't understand or always appreciate the relationships I had and I wrinkled my nose at the "older love" scenario, but the older I get, the more I realize that love has nothing to do with age, but truly and honestly has everything to do with the heart.

Michelle I absolutely adore your blog and love the header pic. That's gorgeous. Margaret, what a great blog post and I love love love the cover of Spring Chickens. I can't wait to read this book. Have a great day ladies !!

Taryn - Live, love and learn, right? Thanks so much for coming by!

Krista - you are a doll! Thank you!

I am so elated to find an author who writes about "older" characters. I'm quite a few years past 5-0, and I very rarely read anything involving people my age. Kudos for you! I can't wait to read your book.
Patti

Age is just a number, baby! And I tell you right now, I don't plan on leaving sexy in my thirties, forties, fifties or sixties. Hopefully not my seventies or eighties either, but we'll see. Thank you Margaret for reminding us love and lust are not only for the "young."

Patti - I hope you enjoy it! I realized as I was writing this blog post that 3 of my 4 novels focus on characters who are 40+. It wasn't intentional on my part. I guess I just have an easier time relating to the 'seasoned' characters. :)

Megan - There's no way you won't be just as adorable in your eighties as you are now!

Somehow I feel I should be saddened by this post. I'm days from turning 40 and while I wasn't preciously freaking out about the whole "over the hill" thing. I AM NOW! haha

*sticks tongue out at all those young whippersnappers*

Great post, Margaret and Michelle! See you on my birthday! Yeah, you hear me. I'm turning 40 at Lori's on Friday! Woo hoo!!!!

I can't wait to read Spring Chickens, Margaret. I won't even tell you how old I am, but I can tell you that 40 ain't bad. That's when life gets interesting! Cheers to you on your new release!

Woot! I just received word from Michelle that I won the free copy of Spring Chickens! I'm happy dancing all over the house. I can't wait to read it. Thanks so much to both of you!