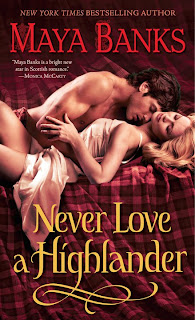 
Book Blurb:
Caelen McCabe’s young, reckless heart nearly destroyed his clan. Now, putting family loyalty above all else, he steps up to marry his older brother’s jilted bride and salvage the uneasy alliance between two clans. While beautiful Rionna McDonald is a fit wife for any man, Caelen trusts no woman, especially not this sweet temptress who torments him with white-hot longing.As the sacrificial lamb in her father’s power game, Rionna will do her duty but vows to protect her heart and her pride from humiliation. Despite everything, though, the heat in Caelen’s touch melts her defenses, and she craves the sensual delights of a husband who guards his emotions as fiercely as his clan. But when the ultimate battle for the McCabe legacy is upon them, Rionna’s true warrior spirit emerges. She will risk the wrath of her father, the fury of her enemies, and her life to prove to Caelen that his wife’s love is too precious to lose.

Never Love a Highlander was a spectacular ending to an immensely wonderful Historical Highland Trilogy. I loved each and every book and will happily add to my re-read list.

Each of the McCabe brother's personalities were vastly different and each of their story was completely different. I adored each one of them and for various reasons. Caelen was an awesome character to get to know. He seemed quiet in the first two books and there was a lot of mystery around him. What made him tick? What was he thinking? There was just enough of these lingering questions left over from the first two books to have me eagerly dive into his own book.

Caelen and Rionna were literally thrown together. I felt badly for Rionna as she was being rejected and tossed around from betrothed to betrothed. She deserved better but each time she held her head high and always her loyalty and duty came first. In fact, she was a little intimated by Caelen and he did little to resolve her of those feelings. Rionna earned my respect immediately and I liked her very much from Seduction of a Highland Lass book 2.

Caelen continued to be secretive to me. Of the brothers he had the most romantic flowery words flow from his mouth in the intimate scenes but outside of Rionna’s and his private chamber, he was all alpha and abrupt. He was so gentle in private but as Rionna stated it, “Tis the truth I’ll never bear a child if he doesn’t learn to close his mouth at the appropriate time.”

Eventually their love does bloom and Caelen and Rionna are the most suited couple for each other. They endured a lot together in Never Love a Highlander. I don't want to pepper the review with spoilers but there was never a dull moment. Excellent read on their journey of love and with lots of added action the plot was extremely engaging. I want to re-read the series right now!

I really hope the loyal Gannon gets a book or a happy ending somewhere. Not that he was miserable but he just deserves one.

Great review! I have been wanting to check out Maya Bank's Highlander books for a while now. Good to know they're the kind of books you can read and read again!