Under the Same Sky by Genevieve Graham 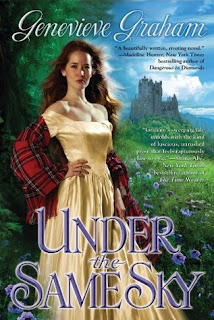 Under the Same Sky

Book Blurb:
Maggie Johnson has been gifted with “the Sight” ever since she was a child. Her dreams bring her visions of the future and of a presence she knows is not a figment of her imagination. She calls him Wolf, having watched him grow from a careless young boy into a fearsome warrior, and she trusts him with her life and her heart.Andrew MacDonnell is fascinated by the woman who has visited him in his dreams for as long as he can remember, entranced by her beauty, knowing deep in his soul that she is as real as he. Although he doesn’t know who she is, Andrew believes that destiny will bring them together.

When tragedy and war strike their homelands, both Maggie and Andrew suffer indescribable losses. Separated across an ocean, the bond they share nevertheless grows as they sense each other’s pain, lend each other strength, and embark on a journey of the spirit to find and love one another at long last…

The romance between Maggie and Andrew was magically unique. I don't think I've recalled a similar story before so I really appreciated the originality. As unconventional as Maggie and Andrew's romance may have been, it was the alluring written words that drew me in. I had to double check the author's website, Genevieve Graham, to verify that Under the Same Sky was indeed her debut novel. I was utterly captivated with the story and how it was being told. Simply beautiful. The words were richly descriptive and I literally ached in my heart many times during the course of the story.

If you follow historical books from the 1745 time period, you'd be very familiar with the abhorrent quality of life for unprotected women as well as the legendary historical Battle of Culloden in Scotland. I immediately associate the year 1745 with Culloden. Under the Same Sky takes the reader on a painstakingly thorough and emotional journey during the aftermath of two such dreadful events.

Through their dreams, Maggie and Andrew develop a moving relationship built solely on the knowledge of each other's existence and a longing to be together. They are soul mates and they are willing to seek out and wait for each other despite an ocean separating them. Without spoken words they encourage each other and bring hope to their darkest moments.

I was lucky enough to receive an advance copy of this book and I, too, loved it. The story was uncompromising, the author's voice almost lyrical, and the writing as evocative and magical as the connection between the H/H. An amazing debut.

Thanks for the review. This book sounds great, I can't wait to read it! I have seen Genevieve Graham on goodreads we were both commenting on the Outlander series. From your review her books looks like it will be the kind of book I love. Good luck to her and thanks for the review!

Thank you SO much!