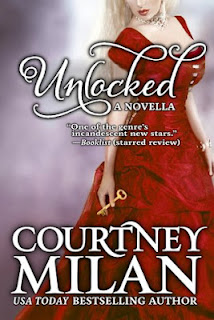 Lady Elaine Warren and Evan the Earl of Westfield's book

Unlocked (Novella 1.5 in the Turner's series)

Book Blurb:
A perpetual wallflower destined for spinsterhood, Lady Elaine Warren is resigned to her position in society. So when Evan Carlton, the powerful, popular Earl of Westfeld, singles her out upon his return to England, she knows what it means. Her former tormenter is up to his old tricks, and she's his intended victim. This time, though, the earl is going to discover that wallflowers can fight back. Evan has come to regret his cruel, callow past. At first, he only wants to make up for past wrongs. But when Elaine throws his initial apology in his face, he finds himself wanting more. And this time, what torments him might be love... Unlocked is a novella of 28,000 words (about 111 pages)

For only .93 Unlocked (CAD) is an amazing deal! What a sweet little addition to the Turner series. Now granted that neither Elaine nor Evan is a Turner but the readers were introduced to Elaine in the first story Unveiled.

In Unveiled Elaine was the only one of Margaret's friends who would make time with her while her legitimacy was in question. I liked her right away.

In Unlocked you get a true feeling of the torture it is to be bullied. Elaine was bullied for so many years and Unlocked perfectly demonstrated the life cycle of bulling. You get insight as to why some young people start to bully for popularity and attention like Evan did and then you also get insight as to why bullies don't know how to stop like Evan's cousin Diane.

Regardless, when you hear Elaine share with Evan some of the harmful things she did to herself to remedy the bulling, your heart can't help but break a little bit. Thank goodness Evan grew up and was trying to mend his ways.

A wonderful little story about bulling and forgiveness with the extra added touch of a warming romance that bloomed from a long overdue friendship.