The Truth About Lord Stoneville by Sabrina Jeffries 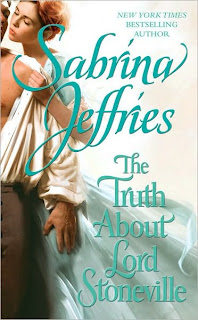 
The Truth About Lord Stoneville

In the two decades since a tragic "accident" took the lives of his parents, Oliver Sharpe, the Marquess of Stoneville, has survived the scandal surrounding that fateful night by living as an unrepentant rakehell. And with his grandmother vowing to disinherit him if he doesn't settle down and wed, he plans to fulfill the bargain in true Sharpe style -- by bringing home a fake fiancée from a brothel! But his scheme is derailed when he rescues an American beauty in a dire predicament instead. Maria Butterfield came to London to track down her groom-to-be, who's gone missing, but her engagement won't stop Oliver from getting what he wants: her, in his bed. His rebellious masquerade may call his grandmother's bluff , but it's soon made all too real -- by a love that tempts him to be a hellion no more.

I really enjoyed The Truth About Lord Stoneville. This was my first read from Sabrina Jeffries and first time being introduced to Oliver (Lord Stoneville). Loved them both!
Oliver Sharpe, the Marquess of Stoneville was sure in for a surprise when the tables get turned on him. His grandmother's ploy to get her grandchildren married off seemed to be exactly what Oliver needed for healing. Whether or not he knew he needed the cure.
Oliver had a tragic moment early in his life that scarred him for years to come. It was heartbreaking really. His mother was furious and in her anger she said some things that if she lived, she would have deeply regretted. The thing is, I understood his mom. Being a mother myself, I know that there are times where I am so angry I say something that I don't necessarily mean. I later regret and apologize profusely. I am so saddened for his mother and for Oliver that those harmful words were the last thing she ever said to him before she died. It leaves a pain in my heart and huge lump in my throat.  This very incident is the core basis for how Oliver's life was shaped and how he grew into the rake he was. The burden on his shoulders was immense.
Maria was like the healing salve being gingerly applied to heart.  The minute Oliver met Maria, as she threatened to stab him in the neck with a sword, he knew she was different. She was outspoken and said her mind instead of the English prudish way he was used to. Being American she didn't salivate over gossip and paid little credence to the ton's talk and rumours. I liked her right away. Even though she was strong willed women, I loved that she was still so completely soft that Oliver's kisses could still melt her.
I like that this Hellion Series has a back story mystery attached. As I head into book 2 A Hellion in Her Bed, I am eager to see the little bit of a cliffhanger continues. I'd hate to stop on just book 1 The Truth About Lord Stoneville because I am eager to read these siblings through to the end. They all have such different and awesome personalities that I can't wait to read their matches.
Teasers: hungry cousin Freddy, conniving grandmother (whom I adored), brothel encounter, fixed Valentine's Day ball 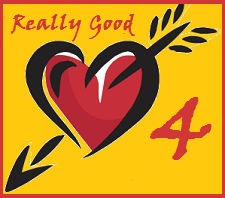