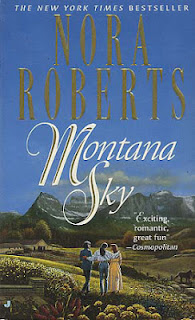 
Book Blurb:In life, Jack Mercy hadn't been a kind man. In death, he was no different. His daughter Willa expected to inherit his ranch, the place she'd put her heart and soul into. But at the reading of the will, she learns that her home has been given not just to her, but to two sisters she barely knows as well. And in order to inherit, they must all live on the ranch for a period of one year.

None of the three sisters are happy with the arrangement. And apparently, neither is someone else as deadly incidents begin occurring around them. Willa, Tess and Lila find themselves fighting for their lives alongside the men who have become part of the lives and their hearts. 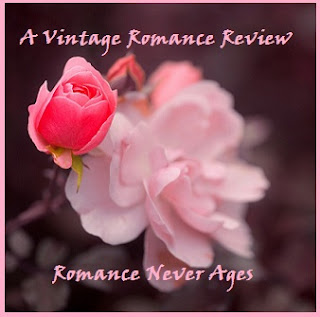 Great story with a bit of a romance, sisterly love, mystery and suspense all mixed together.

Montana Sky was broken down into the four seasons and each one was carefully plotted and perfectly paced with a full year of content. I found none of the sections dragged on nor ended too quickly. Even through the cold and blistering winter season, you can't help but be swept up into the descriptive settings so beautifully written by Nora Roberts. 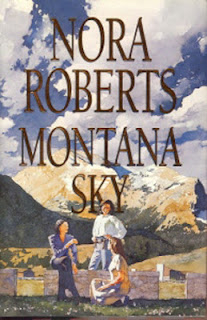 Three sisters, who were complete strangers, were forced to live together for a full year as a condition of their wicked father's will in order to earn their inheritance. Jack Mercy was a complete jerk in life and I suppose upon his death he wanted to remain as mean spirited as he lived. I kept hoping over and over again that it would eventually be revealed that he wanted the three sisters to know each other and become a family but it just turned out that he was as mean as ever. The man had no love for anyone except his ranch.

Montana Sky did not really come across to me as a romance novel. I would wholeheartedly agree about it being a women's novel but the story was more centered around the growth of the relationship between the sisters. Tess, Lily and Willa were fabulous characters. By the end of the story, I felt I had friends. Each were so different and over the course of the year the women's characters and personalities had grown substantially. Tess from a shallow city girl to a horse riding and caring woman. Lily from the shy, scared flower to a woman who could stand on her own two feet and finally Willa the woman who felt she had to prove everything to world could finally accept that she already had everyone's admiration and respect. I also loved that the women each helped themselves get to their special place and it was not from the guidance of a man.

With three women came three romances and once again each one was different and matched perfectly to the sisters personalities. They were a joy to read.

Being a vintage romance from the 90's it was awesome to read about about the aged electronics like VCR movies and the clothing styles of the nineties. I loved being able to pick up on those notables and giggle when I read about typing reports or lacey collars on dresses. So authentic.

Throughout Montana Sky there is a mystery brewing and a brutal murdered on the loose. I had no idea who the culprit was and I was often changing my mind on who the killer could be. It was not until the very end that the pieces of that suspenseful puzzle came together.

Teasers: Mercy Ranch, fight with mounted animal heads, scalping, Tess with trail of condoms - "I don't know whether to be afraid or flattered."