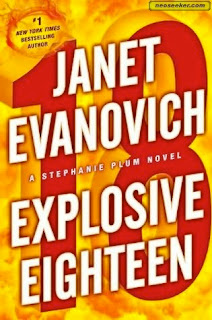 
Book Blurb:
Before Stephanie can even step foot off Flight 127 from Hawaii to Newark, she’s knee deep in trouble. Her dream vacation turned into a nightmare, she’s flying back to New Jersey solo, and someone who sounds like Sasquatch is snoring in row 22. Worse still, her seatmate never returned to the plane after the L.A. layover. Now he’s dead, in a garbage can, waiting for curbside pickup. His killer could be anyone. The FBI, the fake FBI, and guns-for-hire are all looking for a photograph the dead man was supposed to be carrying. Only one other person has seen the missing photograph—Stephanie Plum. Now she’s the target, and she doesn’t intend to end up in a garbage can. With the help of an FBI sketch artist Stephanie re-creates the person in the photo. Unfortunately the first sketch turns out to look like Tom Cruise, and the second sketch like Ashton Kutcher. Until Stephanie can improve her descriptive skills, she’ll need to watch her back. Over at the Bail Bonds Agency it’s business as usual—until the bonds bus serving as Vinnie’s temporary HQ goes up in smoke, Stephanie’s wheelman, Lula, falls in love with their “largest” FTA yet, lifetime arch nemesis Joyce Barnhardt moves into Stephanie’s apartment, and everyone wants to know what happened in Hawaii?! Morelli, Trenton’s hottest cop, isn’t talking about Hawaii. Ranger, the man of mystery, isn’t talking about Hawaii.  And all Stephanie is willing to say about her Hawaiian vacation is . . . It’s complicated.


For fans that have given up on the books my advice is , don't. The seventeenth book and Explosive Eighteen were both really great. Not as awesome as her earlier books but still are great reads that are sure to put a smile on your face.


My review of the 18th Stephanie Plum series does contain spoilers. They are light spoilers but none the less, they will give away some of the story. So if you don't want to see truly what I loved about Explosive Eighteen without ruining it for yourself, pass for now.

*
*
*
*
*
*
My favourite thing about Explosive Eighteen is that Stephanie doesn't favour Ranger or Morelli more than the other. She has them both! And she does it in such a way that Stephanie doesn't come out looking like a floozy. Stephanie recognizes that her morals have taken a back seat and she feels guilty about it. It is hard for me to agree with her because I'm the girl cheering her on. Go Steph! Don't choose. Take 'em both!

With most of the books there is a mystery to be solved and I liked the one in Explosive Eighteen. The beauty of reading a book in first person is that we the readers don't know how the mystery is progressing along or how it will end either. We are learning right along with Stephanie.

Of course Explosive Eighteen continues with Stephanie's slip ups and her lack of experience at catching the skips. Some very funny slip ups and Lula continues to add humour to every scene she is in.

Explosive Eighteen has the return of Stephanie's nemesis Joyce Barnhart and she is marginally civil in this book. Grandma Mazur makes a few appearances but is not a dominate character. Ranger and Morelli each get the same amount of air time and you have a group of villains after Stephanie.


Speaking of villains, there is one crazy dude named  Razzle Dazzle that may be internationally known but he ends up being no match for Stephanie. I love when Stephanie takes care of herself and outsmarts these criminals. I was pleased with how she fought this crazy criminal. I was proud.

Explosive Eighteen was a perfectly enjoyable read and what a treat to get two books in one year.

Great review, but I just can't bring myself to read this one. The series has just completely gone downhill for me :(

I have actually never not liked one of these books. I know, they are getting crazy, and dare I say it, a little trashy paperback-y, but I love nothing more than reading one in a hot bath. To be fair, I think most of the reason I enjoy them is to see if Ranger and Stephanie get naked together. lol

Alyssa - I totally understand. After Twelve Sharpe, which is my most favourite, the following few afterwards were not that great at all. Even hokey in parts. But they still make me smile. I wish she'd beef up and go a bit deeper with the mystery like her earlier books.

Katrina, you are awesome and a total fan. *high fives* I am so with you on Steph and Ranger. You're a Babe!

The only book in the series I have yet to read (I enjoyed each one) - I always look forward to the humor, romance and excitement with the villians!
Thanks for the great review and I look forward to reading this one too :)
kimberlybreid at hotmail dot com