An Affair with Mr. Kennedy by Jillian Stone 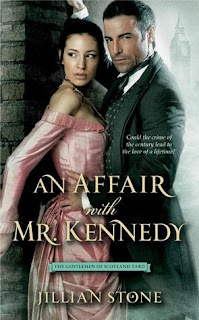 An Affair with Mr Kennedy


Book Blurb:
London, 1887. Part stoic gentleman, part fearless Scotland Yard man, Zeno "Zak" Kennedy is an enigma of the first order. For years, the memory of a deadly bombing at King's Cross has haunted the brilliant Scotland Yard detective. His investigation has zeroed in on a ring of aristocratic rebels whose bloody campaign for Irish revolution is terrorizing the city. When he discovers one of the treacherous lords is acquainted with his free-spirited new tenant, Cassandra St. Cloud, his inquiry pulled him unexpectedly close to the hear of the conspiracy -- and into the arms of a most intriguing lady. Cassie is no Victorian prude. An impressionist painter with very modern ideas about life and love, she is eager for a romantic escapade that is daring and discreet. She sets her sights on her dour but handsome landlord, but after she learns their meeting was not purely accidental, she hardly has a chance to forgive her lover before their passionate affair catapults them both into a perilous adventure.


It was An Affair with Mr. Kennedy's cover that drew me in. It is quite beautiful. I also was really intrigued by the time setting of London 1887. I haven't actually read many Victorian romance novels and I have to say, I think I will look into reading more. I like that time period was a bit more technologically advanced than the Regency era. I also read a wonderful blog post (but I can't remember who's blog) where Cassie and Zak played the Newlywed Game. I loved them as a couple and their banter & chitchat made me want to know them more. So those are the  direct reasons for me picking up and buying An Affair with Mr. Kennedy.


I loved the conversation and chemistry between Cassie and Zak. In fact that particular banter that I read on that blog was very accurate and I immensely enjoyed reading about the pair. I really liked Zak. He seemed so serious and a bit stiff at first but his wit made perfect appearances. I loved how frank he could be with Cassie and how she made him lose his proper self.
He exhaled. "I'm having wicked thoughts about you. Was that charming?"

"In a wolfish sort of way."
"Excellent"
That charming bit of conversation happened just upon entering a packed ballroom. I loved it!


The interesting part of reading about 1887 is how the women's movement was much more advanced than my more normal reads of the Regency era. I got a really good taste of the how the women were making their way in the world. Cassie and her mother Dr. Oliva Erskine were women before their time. Cassie's mom was a respected doctor and at the beginning of An Affair with Mr. Kennedy, Cassie is visiting the hospital where her mother, Dr. Erskine practices. They have a humourous conversation about how some women come to the hospital to get "treatments" from a vibrator. This treatment is to avoid madness. I was laughing but interestingly enough, I just watched on the history channel where that was an actual fact. Great research done by Jillian Stone.

Cassie and her friend ride bikes; in pantaloons no less! She smokes cigars and is a very modern artist with painting tasteful female nudes. I loved her directness and she was an excellent match for Zak. This independence that she carried herself with was also the downfall in the book for me but I'll explain that part in just one moment.

The story plot itself was a bit confusing for me. There was lots of political focus with Zak being a Scotland Yard officer and the case he was on. I admit to not "getting it". I didn't fully understand the whole Irish struggle and why all the bombings in London. Since that was the main plot of the story, I wish the author took a bit more time with explaining that part of the story. I am not sure if it was historically accurate and I am curious so I'll look it up.

I was also a bit disappointed that Zak is confronted with someone important to him from his past during his investigation and it really seemed to let me down. I wanted more from those few scenes.

I felt as a reader that many parts of the book was left up to the reader to make setting assumptions. It just jumped around for me. I felt I had to go back and re-read a few paragraphs to ensure that I had my bearings correct.
For example: there was an intense scene where Cassie is cornered in an art studio and all of a sudden she is on the platform. I am reading the paragraph and saying to myself, 'what platform?' So I had to go back and re-read the paragraphs and I have no idea where this platform came from or why it was significant. It really wasn't explained correctly so when I went back to read it, I had to envision the entire scene differently so that I could now place in this platform. This lost placement seemed to happen to me a lot.

Okay so now back to Cassie's independence and where An Affair with Mr. Kennedy all went wrong for me.  I loved that Cassie was independent and strong and witty but why oh why when the story needs to advance to the next step, do authors sometimes proceed with this advancement at the cost of the making the heroine stupid! Why!?! Jullian Stone built Cassie up to be this modern bright women and just like that, she made her do stupid things. I want to list them all but it basically boils down her protests for having extra protection and her stubbornness. It is so obvious to everyone and even including her that she is in some danger. I wish with all my heart that this story was more about Cassie being smart and realizing that Zak is an experienced, well respected officer and she trusted his decisions. Then go ahead, have everything go wrong but at least she did the right thing. All her actions after she arrived in Paris (after being chased, kidnapped and shot at) was just stupid. Why would she go to an Art Gallery? Alone?

An Affair with Mr. Kennedy would have been a 5 star novel for me if the story would had advanced with Cassie being smart with her moves and decisions. Why build up Cassie to be such a strong women if only to make me dislike her and her weak decisions. I just don't get that line of reasoning. It was frustrating when all I wanted to do was like her so much. 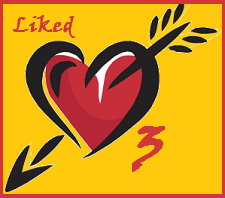 I hate when the author makes a smart character act stupidly, too, because it doesn't make any sense. Great review!

Thanks. I feel kinda mad about the book. I wanted to love it so badly.

I'm such a character reader I'm not too sure about this one. But the cover really is pretty and the quote is great! Nice review Michelle! :)

Thanks Julie. Yeah the Cassie character was disappointing at the end.