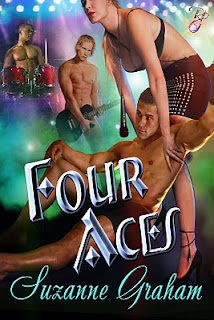 
Stacy’s luck seems to be changing for the better when she volunteers to sing with Trace, Jason and Pace for the Battle of the Bands. Winning this contest would get her closer to her professional music goal—certainly not her personal one, as guys this good-looking wouldn’t be interested in her.


But when they each show admiration for her talent and appreciation of her other assets, her dead mother’s voice of morality in her head holds her back from following her passion—until the men convince her she deserves to pursue all her dreams.


Anytime there is a book where a band is involved and music is part of the plot, I perk up and can't wait to read it. Then when the heat level gets turned up between the band members, it's a combination that is sure to make sweet music on paper.


I really liked Four Aces. I simply adored the how the three male members of the band met Stacy at the coffee shop. It set the tone of the story off perfectly.


The band members names are Jason (Jace), Trace and Pace and the female singer is Stacy (Stace). Oh yes, notice their names all have "ace" in them. It does make it a bit confusing to know who is who and honestly after awhile I just gave up. Although it is catchy to have the "Four Aces" as an idea for a story, I did not like that I was constantly confused on who was who.


In addition to learning a bit about the men, Stacy has a bit of history brought into the story too. She is a down to earth girl and I really liked her.


The climax of the story is at the conclusion where the group gets together intimately. It was written very naturally and even believable. That's hard to pull off for a quad. Because the author spent most of the story getting to know the protagonists, the reader  feels happy for them and hopes it all works out for them. Four Aces felt like a story of an emerging relationship between the group and then an added mix of sexiness brought in for good measure.
You can read an exerpt here on author Suzanne Graham's website here.

I like rock band books too. And it's nice to hear that the quad isn't too over the top. I say 'too' because I think quads are over the top regardless, but they sure can be fun to read! ;) Nice review!

eToro is the best forex trading platform for beginner and pro traders.