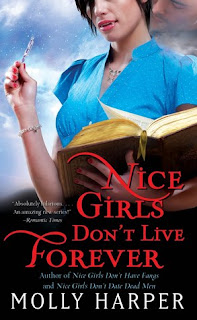 
Book Blurb:
Nothing sucks the romance out of world travel like a boyfriend who may or may not have broken up with you in a hotel room in Brussels. Jane Jameson’s sexy sire, Gabriel, has always been unpredictable. But the seductive, anonymous notes that await him at each stop of their international vacation, coupled with his evasive behavior over the past few months, finally push Jane onto the next flight home to Half Moon Hollow — alone, upset, and unsure whether Gabriel just ended their relationship without actually telling her.

Now the children’s-librarian-turned-vampire is reviving with plenty of Faux Type O, some TLC from her colorful friends and family, and her plans for a Brave New Jane. Step One: Get her newly-renovated occult bookstore off the ground. Step Two: Support her best friend, Zeb, and his werewolf bride as they prepare for the impending birth of their baby . . . or litter. Step Three: Figure out who’s been sending her threatening letters, and how her hostile pen pal is tied to Gabriel. Because for this nice girl, surviving a broken heart is becoming a matter of life and undeath...

I'm really enjoying this Jane Jameson series. This third book, Nice Girls Don't Live Forever is probably my favourite so far. There was a lot of character development and a captivating story line. I loved it.

I wish Jane was a real person because I'd love to have her as a friend. She is so good to her friends. She is supportive, generous and humourous and in return, her friends are just as companionable back to her. What a brilliant cast of secondary characters this series has. Molly Harper relies on this secondary cast to carry their weight of the story almost as much as her main protagonist, Jane. If it wasn't for Jane's friends, there wouldn't be much of a story at all. This opinion is not meant as a slight at all. Please accept it as the highest praise because I love a story that includes an engaging cast of characters that can hold a reader's interest. Kudos!

Nice Girls Don't Live Forever held quite the puzzling mystery over on the readers trying to figure out what Jane's sire/boyfriend, Gabriel was up to. I believed from the beginning that Gabriel would never have cheated on Jane but why was he so distant and mysterious? If he was so in love with Jane, why couldn't he share some of his deep dark secrets? Gabriel's holding back of information sure did a mind number on Jane and I was feeling sorry for her. Jane handled herself really well. She earned my respect by not chasing him down, crying and forcing him to talk. She held her own by carrying on and being with her friends. She did a great job not sticking them all in the middle.

The only wee bit of respect I lost for Jane was when Gabriel and her do start and have that long overdue talk, she blurts out a few insecurities about not understanding why Gabriel would want her. GAH! I was so hoping she wouldn't be THAT girl. I mean in real life, those girls are a dime a dozen but I wish Jane thought of herself more highly. I wanted to mold Jane into role model and I guess that's not fair.


Jane comes around again for me though with a few  awesome sister scenes and I continue to love her relationship with her mom. The pair crack me up. I want to limit the amount of spoilers because there is a lot of great scenes in Nice Girls Don't Live Forever. But I have to share one of my favourite scenes.


"Andrea opened her door, wearing Dick’s “Virginia is for Lovers” T-Shirt and no pants, drinking a Budweiser from the can. A Wrestlemania highlights DVD was playing in the background. “Baby, who is it?” Dick asked, coming out of the kitchen, wearing one of those beer-drinking helmets, jeans and no shirt. “I take it back, you are not the same woman I met a year ago,” I told Andrea. Andrea burped noiselessly under her breath. “I’m aware."


Funny, emotional, frustrating, the whole package is here to enjoy and I so hope you take the time out to introduce yourself to Jane and her wonderful friends. 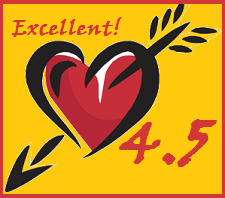 I'd forgotten about that scene! LMAO! You rated these books as most did when they first came out. Each better then better. As you know, I love each book so even though we had different feelings about this series, I'm glad you ended up enjoying the books. I am VERY curious to see where book four is going to go. :)

Thanks for stopping by Julie. I did end up loving them. I can't wait for the next one. I'll be getting it for sure.