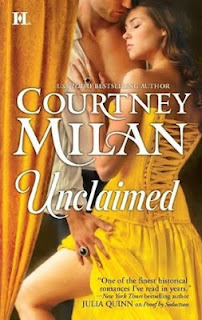 Book Blurb:
HER ONLY HOPE FOR SURVIVAL... Handsome, wealthy and respected, Sir Mark Turner is the most sought-after bachelor in all of London—and he’s known far and wide for his irreproachable character. But behind his virtuous reputation lies a passionate nature he keeps carefully in check… until he meets the beautiful Jessica Farleigh, the woman he’s waited for all his life. IS TO RUIN THE MAN SHE LOVES... But Jessica is a courtesan, not the genteel lady Sir Mark believes. Desperate to win free of a life she despises, she seizes her chance when Mark’s enemies make her an offer she can’t refuse: Seduce Mark and tarnish his good name, and a princely sum will be hers. Yet as she comes to know the man she’s sworn to destroy, Jessica will be forced to choose between the future she needs—and the love she knows is impossible.

Unclaimed was spectacular and memorable. You don't come across many historical novels where the hero is a virgin. In fact, I think that Sir Mark may have only been the second male virgin hero I've ever read.

Unclaimed once again reminded me of how hard the women of historical times had it. Society was tough on us. The destitute conditions women were left in barely allowed them an outlet for survival. I think that's why when I read historical romances where the women smartly prevail and then become heroes in their own right usually end up becoming some of my favourite books. Jessica is an amazing woman.

Life had not been good to Jessica and she had been dealt a bad deck of cards. Yet through it all, she remained strong and in the end, despite the hopeless situation she was in, she still held her moral ground. I liked Jessica's character right away. She was beautifully written and I loved how she handled herself over and over again.

Sir Mark is Ash's brother from Unveiled. It appears that five years has passed since Unveiled and the maturity had done Mark some good. His book on the Practical Guide for Men on Chasity was published and he ends up becoming quite the celebrity. He is pursued by women, parents want to marry him off to their daughters, wrote about with no regard to privacy and he is invited everywhere. All to his chagrin. He says over and over again that he just wrote a book but society has placed him on a alter. Sir Mark may be a virgin but he is no saint. He's the first to admit it but his scores of fans won't believe it.

He escapes to the country for peace and then finds the cunning and beautiful Jessica.


From the moment they meet the reader is taken on a anticipating journey where want and desire is just out of reach and you want Mark and Jessica to reach just_that_little_bit_further. Such a descriptive journey and you really feel for both characters.

There was a moment where Jessica had to make a decision and I really didn't know which way she was going to turn. I gripped my Kindle and literally spoke out loud to the character. Yeah I got that deep into the story!

Loved Unclaimed immensely! I cannot wait to read Smite's book. (which is where I am headed right now)

Sounds like a read I'd enjoy. I sometimes forget how bad it was for the women in the past to survive, it's good some books remind us of that. I love when the heroines outsmart the society, so to speak. Great review!