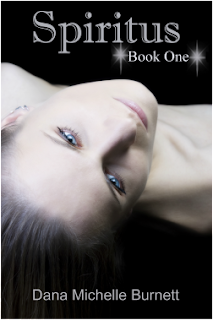 Today I pleased to have author Dana Michelle Burnett guest post and share her Guilty Pleasure. Dana's current YA book is Spiritus. Check out some free chapters.

It's finally here.  It's one of those rare afternoons when I have nowhere to go, nothing to write, and no editing to do.  The entire day stretches out with possibility, but my one thought is HIM.

He's teased me all this time, looking at me from across the room with those smoldering eyes.  He's my guilty little secret, the one thing that I tell no one about.  We go back years, he and I, and while I've aged, he remains exactly the same. 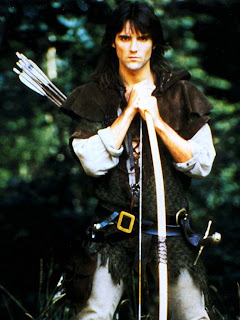 I change into something more appropriate and pour myself a glass of wine.  I can't wait to hear his voice whisper those words of love and devotion.  I go over to him, slowly take it out, and put it in...

And the opening credits come on the screen.  I sit back and spend the afternoon with Robin of Sherwood.
Now anyone that has not seen an episode of this popular 80's series will not understand.  Sure, it's a television show based on the popular Robin Hood character, but there is something else.  Rather than the action packed, sword fighting story you are used to, this Robin Hood is dark, magical, and terribly romantic. 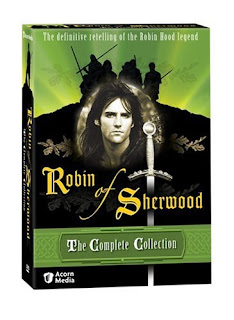 Yes, my guilty pleasure is spending the afternoon swooning over such lines as "I have loved you from the first moment I saw you and every moment since".

As a writer, I can only hope to one day write dialog like that!
I first came across my obsession on the cable channel Showtime.  There I was, a little girl of eight or nine, savoring those romantic words like candy.  Needless to say, men had a hard time measuring up to my expectations.

Now why do I keep this a secret?  In an era where reality television rules, how can I admit that I prefer to spend an evening with a bunch of forest dwelling merry men in tights.  Yep.  That's me, the super cool paranormal romance author crying like a baby over the season one finale.  Makes you want to run out a buy my book right away, doesn't it?  No, but that’s okay.
I guess I've outted myself as a Robin of Sherwood fan..but that's okay too.

Is there a special DVD series that you get all settled down and comfy to watch? Do you have a guilty pleasure lurking? 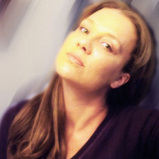 Dana Michelle Burnett spent most of her life writing short stories and sharing them with family and friends. Over the years, her work was published in numerous commercial and literary magazines  including Just Labs, Mindprints: A Literary Journal, Foliate Oak, and many more.  Her short story John Lennon and the Chicken Holocaust was include in The Best of Foliate Oak 2006.  In 2010, Burnett's first novel, Ghost Country, was released.  Based on her own Cherokee heritage, the novel marked her return to the literary world after a four year hiatus.  She followed that with the release of her first romance novel,Two Out of Three in the summer of 2011.Spiritus is the first novel in her new  paranormal romance series by the same name. The second book,Haunted,  is expected in the spring of 2012.
Dana Michelle Burnett

I have to admit that I had never heard of this series before. I love the 80's and I also love Robin Hood (especially a romantic version) so now you got me all curious!

My DVD guilty pleasure is Gilmore Girls, Smallville, Buffy, Angel, Firefly and wow I even have more.

I love to watch a TV series via the DVD collections. No commercials and no cliffhangers.

Thanks for stopping by.

Hi Dana! One of my biggest guilty pleasures is watching my Robin Hood: Prince of Thieves VHS tape, the one featuring Kevin Costner. My god, he is a sexy beast in that movie. I'd never heard of the series you mentioned, but now it's on my must-watch list. The men in tights really do something to me too. I don't know what it is. Plus, any man who can work a bow and arrow like that . . . Well, he would come in handy. ;)