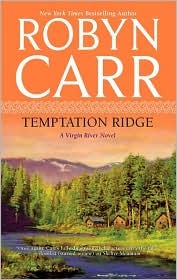 Book Blurb:
At twenty-five, after five years as her mother's caregiver, it's time for Shelby to experience freedom and adventure. Time for travel, college and romance. But when she visits Virgin River, she runs into Luke Riordan, decidedly "not" whom she has in mind.

A handsome Blackhawk pilot, Luke exited the army after twenty years, four wars and having been shot out of the sky three times. At thirty-eight he's tough and jaded. His major was in one-night stands, with a minor in commitment avoidance.
Technically, these two are all wrong for one another. But sometimes what you want and what you need are two different things...two very "good" things.

"Boy howdy" did I weep in this story. We said goodbye to an old friend and met a few new friends. Temptation Ridge was a strong and enjoyable book. I sure hope my blog readers are not getting tired of my blog posts of  Robyn Carr 's Virgin River series yet. Once I latch onto a good series, I need to read each book in order one right after another.
I've noticed that Robyn Carr doesn't really make a Virgin River book about one specific couple. There are of course the main protagonists but the novels are chalk full of events, secondary couple stories and the constant updates to the previous book characters. In Temptation Ridge our main couple is all about the General's niece and Vannie's cousin, Shelby. Luke is a new character, former army (Black Hawk pilot), finding his way to Virgin River. I tell you, these military men are such fun to read about. Each so different yet so much the same.
The adorable Shelby has a plan. After caring for her very sick mother until she passed, she is just rediscovering herself. She's been a caregiver for years. So much so that she has never spent time on herself. She is like a butterfly becoming free of her cocoon. The sheltered life is exactly one of the reasons Luke is so hesitate in pursuing her. He is thirty eight to her twenty five and as much as he tries not to, he sure does fall for her. Only he won't let himself. These men and their inner battles I tell you! Luke makes all these decisions about what he thinks would be best for Shelby without consulting Shelby! You know who knows what's best for Shelby? Shelby!!
The readers are treated to a new character and I certainly was not expecting Art. He is a man with down syndrome who stumbles into Luke's life and it sure seems like he is here to stay. What a gentle man. I loved that  Robyn Carr  introduced a character like Art. There is so much story you can add about him. Art seems to enhance Luke's life and how could he not? He is simply adorable.
OH THE TEARS! We say goodbye to a beloved character and I had a bad case of the sads.
One of the new secondary characters was that sweet hunky doctor that Vannie briefly dated before Paul. Dr Cameron slides into the story by accidentally getting one of Vannie's friends pregnant. I found their side story a bit boring and I did cruise pass their plot quickly. I was in too much of a hurry to get back to the main story of Shelby and  Luke.
There are lots of room for the story to continue in the next book, Paradise Valley, as the readers can look for more of an update from the General and his Hollywood flame, Muriel. There is no doubt more new characters are to be introduced as I don't even think I am half way through the series yet.
Teasers: bear encounter, school bus accident, cabin renovations, a virgin in Virgin River

This is an author I have yet to read. Apparently I am missing out. lol

Hi Julie. The books have been up and down for me. Some amazing and some just good. There is nothing wrong with just being good though. LOL

I'm about to a take a wee break from the series though. I am going to step away from Virgin River for a bit and come back later. I have really enjoyed the characters.