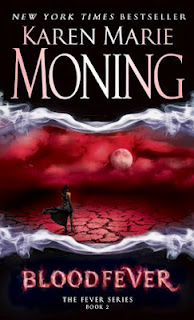 Book Blurb:
I used to think my sister and I were just two nice southern girls who'd get married in a few years and settle down to a quiet life. Then I discovered that Alina and I descend, not from good wholesome southern stock, but from an ancient Celtic bloodline of powerful sidhe-seers, people who can see the Fae. Not only can I see the terrifying otherworldly race, but I can sense the sacred Fae relics that hold the deadliest of their magic.

When my sister was found dead in a trash-filled alley in Dublin, I came over to get answers. Now all I want is revenge. And after everything I've learned about myself, I know I have the power to get it....

MacKayla Lane's ordinary life underwent a complete makeover when she landed on Ireland's shores and was plunged into a world of deadly sorcery and ancient secrets.

In her fight to stay alive, Mac must find the Sinsar Dubh-a million-year-old book of the blackest magic imaginable, which holds the key to power over both the worlds of the Fae and of Man. Pursued by Fae assassins, surrounded by mysterious figures she knows she cannot trust, Mac finds herself torn between two deadly and irresistible men: V'lane, the insatiable Fae who can turn sensual arousal into an obsession for any woman, and the ever-inscrutable Jericho Barrons, a man as alluring as he is mysterious.

For centuries the shadowy realm of the Fae has coexisted with that of humans. Now the walls between the two are coming down, and Mac is the only thing that stands between them....

and went right into BLOODFEVER

. I have to say that I liked book 2 more than book 1. Oh that Karen Marie Moning sure likes to end her books on cliffhangers. Yikes! See this is why I like finding series that are well on their publication way. I'm too impatient. In fact, I am barely stopping long enough to type this review before I dive into FAEFEVER

I think these books get a little hard to review without including spoilers so I'll try my hardest not to give too much away. (Just in case I was not the last person in the book reading community that haven't read this series yet.)

Because I am posting these reviews one after another, I'll start off right away and say, Ok I admit that Barrons grew on me much more in BLOODFEVER

than he did in DARKFEVER

. He is such a complex mysterious man. What or who is he? Is he the Unseelie* King? We keep hearing about the Queen but no King.
Since I mentioned the question regarding the Unseelie King, I love that Moning mentions all kinds of those puzzles from Mac's point of view. It confirms to me that Moning is fully aware of all those unanswered questions the reader is cognizant of and should be questioning at this point of the series. I LOVE when an author doesn't hope us readers forget about those things.
Ok back to Barrons - By Moning's brilliance she is allowing us to know Barrons without actually knowing Barrons. Once again with inventiveness she isn't pointing out the obvious by stating "Barrons was stricken" but instead when he is devastated in a scene later in the book, you know he is sick at heart by is actions. This writing style is my absolute favourite and I love when a talented author can deliver as such.

Mac continues to be my favourite character. I adore her. Simply adore her. Can I join a MacKayla fan club? She is a rainbow where there is no sunshine. She is brave when I think there could not be any bravery left in her. She endured A LOT in BLOODFEVER

and is probably the most kick ass chick out there that I have ever read. Pedestal = MacKayla.

V'lane the Seelie Prince still holds my utmost attention and thank you Karen Marie Moning for having him a part of this story. I have no idea what his ulterior motives are in this book but then again, I have no idea what Barrons' are either.  I want to like him but I am so wary of him. I cannot wait to see how he turns out or where his story leads. Constantly we are being told Seelie* or Unseelie*, neither or good.

Malluce is one of the most disgusting characters I loved to hate. I despise him with the heat of a thousand suns. His role that lead up to the climax of BLOODFEVER

was outstanding. Again no spoilers (sooo hard) but my hands were sweating holding my little mass market paperback.

The ending was a huge cliffhanger and if I had to wait from 2007 to 2008 I wouldn't have lasted. Angst and me are not friends. lol

(definitions from book glossaries)
*Seelie - The "light" or "fairer" court of the Tuatha De Danaan governed by the Seelie Queen, Aoibheal.

*Unseelie - The "dark" or "fouler" court of the Tuatha De Danaan. According to Tuatha De Danaan legend the Unseelie have been confined for hundreds of thousands of years in an inescapable prison.
Posted by Unknown at 5:27 PM

You think this was a cliffhanger? Wait until book 3. No, wait until book 4! (I know you've read them all already, I'm just writing this comment pretending you haven't). Barrons is just...RAWR! You got it perfectly. We get to know him without actually knowing anything about him! KMM is a freakin' genius! Now on to book 3!