One of my favourite things about the BBAW is being buddied up with a fellow blogger and given the task of completing an interview. I was buddied up with Laurianne Blanchard from Dangerous Romance. She is just so darn interesting. My life seems so boring compared to her. LOL Please enjoy the interview.

I see from your blog http://dangerousromance.com/ how much you love Urban Fantasy and Paranormal. What elements are necessary in those genres of books to be highly successful?
Michelle, I don’t know about successful, I can only answer about what works for me. If it is an Urban Fantasy, I want to see really well thought out world building, snappy dialogue, a protagonist that is smart and doesn’t make stupid choices. I like to see a great plot where I can’t guess who the bad guy is by chapter 3. This is just a personal thing, but I like to see a romantic possibility for the protagonist, my favourite type is when they don’t really hit it off at first or there is a lot of tension, I’d use as an example The Kate Daniels series. Brilliant world building, she is a bad ass but she is smart, the magic was consistent and you could cut the sexual tension between Kate and Curran with a knife through almost five books. Just incredibly well done.

If it is an Paranormal Romance, I want to see a lot of the same things, but obviously it needs to wrap up in one book, so the romance is much more prominent, less frightening (UF can get pretty twisted), I love a good chase, and two people that are surprised to find they can’t live without each other. I would use Dragon Bound by Thea Harrison as an example of my favourite type of Paranormal Romance. I’ve re-read that book 4 times.

When I read your “About” page on your http://dangerousromance.com/ blog I was stunned and in awe of all the generous charity work that you have done. What can you tell us about your work in the Nepal orphanage and what life experience you took away from that?
Those things keep me sane when my life gets to complicated. Nothing can stop you from feeling sorry for yourself like doing something that puts the emphasis on someone else. Being somewhere like Nepal, where the people have so little and yet are so generous. I am really eager to go back, it is just hard to get that much time off work. One week isn’t enough to go there, it takes you about 35 hours of traveling each way, and the jet lag lasts a day or two so you have to take at least 2 weeks, 3 is about right.

I miss the kids and my friend who runs the orphanage, and my family that I used to live with in Nepal. They are all in my heart though. Nepal is in my heart. It is the most amazing place on the planet, I understand why so many people think it is uber spiritual, it breaks your heart and then mends it. 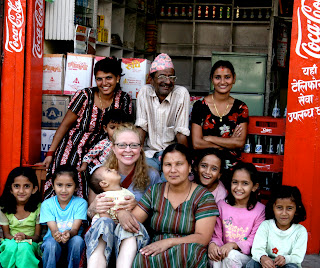 I used to work at the American Red Cross and that was an amazing experience as well. Being a Disaster Volunteer even more so. Someday I want to write a book about my experiences as a volunteer in New Orleans after Katrina and during and past Hurricane Rita. Again, it comes down to being selfish in a way, it makes you feel so good to actually be on the front lines and helping.


I love that you spend time with your guy in an old time country/Americana band. How often does your band get together and sing these great country songs?
We have band practice every Tuesday, usually on our back porch but in the winter, we move the furniture and play in front of the fire place. We gig most weekends. My husband says our optimal crowd is above 4 thousand feet. I don’t know why, but despite the fact that they call us flatlanders for living in the Big Valley, we go over a lot better in the mountain saloons, hotels etc. We’re playing the Placerville Octoberfest next weekend for four hours. Part of the contract however was we have to play the chicken dance every half hour. I may slit my wrists before the show is done!  That song is more pernicious then “It’s a Small World After All”, in trying to get it out of your head. 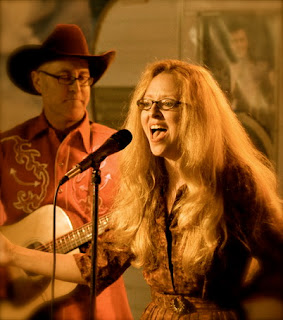 Mike is an amazing musician so I’m honoured to sing with him. We met when I used to open for his Americana Rock band the Tattooed Love Dogs, at a café a friend of ours owned back in the 90’s called “Café Montreal.” Cake used to play there, lots of great bands from the area. I was getting ready to move to Nashville when we started dating, but I came back home 2 years later and we were married within 4 months. Eloped, kept it a secret and had a big family wedding 9 months later in my brother’s beautiful gardens. He said we could have 80 people. Mike kept inviting friends and we ended up with 220 people in the backyard. My brother was not happy but you know, only one flower got crushed.Mike’s band played for the reception at a local bar, it was so much fun. 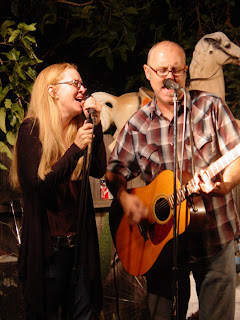 We’ve been together 17 years, raised 3 handsome boys (my stepsons are 21,22,27), and one of them is following in our musical footsteps, which given how hard the lifestyle is, I’m not sure whether to be proud of or sorry, but he’s good and he’s as obsessed with it as we are so I doubt I can talk him out of it.
We have a live music TV style show we are doing called the Rabbit’s Foot Ramble, which is a lot of fun as well.

Do you aspirations of being an author yourself?
Yes, I’m working on a project, but I had to put it aside to help my parents finish their biographies. They are 88 soI think it’s better to get them their books in their hands before I focus on mine. I miss writing my little fantasy though!

Do you have a book boyfriend and who is he?
Oh….I have several! It started with Eric from Charlaine Harrison’s Southern Vampire Series, but since then I’ve had book dates with Curran from Ilona and Gordon Andrews series (Kate would kill me if I so much as touched him though so I had to just lust from across the table), Barron’s from Karen Moning’s Fae series is hot but he’s kinda a dick and sorta terrifying. I have a thing for Suzanne McLeod’s Malik. I’m totally obsessed with him. And I really loved Dragos from Dragon Bound by Thea Harrison. But I’m faithful to my Michael, because as hot as all those guys are, they don’t write love songs for me and then let me sing them, which is about the most romantic thing ever. Which makes up for the fact that my husband never remembers either of our Anniversaries. You’d think having gotten married twice and having two anniversaries’ he’d get one right. (sigh)

If you agreed to review a book for an author and you really didn’t like it, would you still read and review or write back the author and let them know you’ve decided not to review?
Michelle, I gotta tell you, this is a tough one. I really want to know your policy as well. I assume you are talking about Indie’s and self-published, because usually if an author is signed to one of the big 5 publishers, it is the Agent or Publicist I deal with. In that case if I write a review I notify the publicist (or try to) to let them know it is up, whether it is glowing or not. If I hate a book I’m not going to finish it ergo I’m not going to review it. If I review a book, I had to enjoy it for the most part, although I will point out things that bothered me.

Re: Self Pub’s.The way I handle it is this, first of all I read the letter. If it is witty and smartly written, and not on topics I don’t want in my head I’ll take a look at the book (for example, I probably won’t read a book about Demon’s. I’m pushing my comfort zone already on a lot of topics. There are a few authors who have written about them that I’ll read but usually I avoid it.) If the topic looks fun, there are no egregious typos in the letter or the first few pages, and the writing is good, I’ll read the first few chapters. I just received a letter from an indie author that was about a Lesbian Werewolf pack. Not my usual fare by any means, but the letter was witty and smart, the book was beautifully designed (fonts, layout) the cover was gorgeous and I couldn’t Wait to start reading.

It is amazing to me however, the poorly written and edited books people will think are done. I have ghost written for other people and believe me, after about my 5th draft, I have had people beta read over and over and they caught typos and grammar issues, then I hired an editor after I was done editing it, and they STILL found typos, then we all read it again before sending it off to the printers and my client (and now friend) and I still found about 3 typos. However there are people out there who just write a first draft and think it is brilliant and send it out. I’ve gotten books in the mail that had easily 10 typos on the first page. I just stop at that point.

If I’m not going to review it due to topic, but thought the book looked well written etc, I’ll write them back and tell them and sometimes suggest other friends that are bloggers who it would be a good fit for them and they are usually very gracious and understanding. I’ve even made friends of a sort with people I’ve told no to, because they understood.
If it is awful however, I don’t write back, because if they sent out trash and thought it was a pearl, they are going to argue about it with me and I don’t  have the emotional energy to invest in that.

Michelle thanks so much for the great questions and the opportunity to talk about myself. It was very therapeutic! (:

Great interview!! I'm following Laurie's blog and have for a little while (and have read hers interview too) :-)
I really think it's a great way to meet others that have a passion for books to. I'm actually envious on you guys, in DK theres not that much focus on fantasy and romance in the same way as in US. Many of the authors you have known for years, I'm just learning to know (It's great - but a bit expensive) ;-)

Michelle, thank you so much for the great opportunity, to meet and get to know another book lover. We're all connected by our love of the printed word and it is great to share that and become a more connected community.