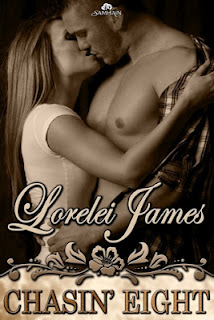 Book Blurb:
She wants it…he’s got it…and the chase is on…

Bull rider Chase McKay has finally landed in a pile too big to charm his way out of. Caught with his pants down, he finds himself bucked right off the PBR tour until he can get his act together.

Hollywood actress Ava Cooper became the tabloids’ favorite target when her longtime boyfriend was outed as gay. She needs a place to lay low and a chance to prove to herself that she can satisfy a red-blooded man between the sheets. The sexy, rugged cowboy she finds holed up in her Wyoming hideaway seems like the answer to her every fantasy.

But Chase has sworn off women. Forever. Or at least a month. Whichever comes first.

When they take to the road to get Chase more hands-on bull riding experience, they have every intention of keeping their hands off each other. But the two headstrong stars quickly end up riding a hot and heady rodeo circuit all their own—until the press gets wind of their affair. When the dust clears and the lights of the paparazzi fade, are they ready to give up chasing the dream for a chance of finding forever?

FAB-U-LOUS!!
Do you know that I never even read the book blurb on Chasin' Eight

? I have such trust and loyalty to Lorelei James’ Rough Rider books that I just clicked to buy. Other than knowing that this was Chase McKay's book, that was all I knew about Chasin' Eight

. Let me start off right away by telling you, I am seriously considering Chasin' Eight

as my favourite of the series. That’s big shoes to fill because I love the McKay/West families but there was just something extra special about Chasin' Eight

is a part of the Rough Rider series however you can easily read this one as a stand- alone. There are some little catch ups from Big Cash Crow and a tad of Colby McKay but if you just want to read an amazing hot cowboy romance story without having to get involved in a series, feel free to pick up Chasin' Eight

This book is not just some dude wearing a cowboy hat & chaps walking around saying “Darlin” to give you the illusion that the protagonist Chase is a cowboy. Lorelei James immerses you into the life of a cowboy bull rider. You feel the bruises, you experience the long drives between rodeos, you yawn with the exhaustion and you even want to spit out the sunflower seeds you all of sudden feel floating around in your mouth. 100% you are engrossed into the life.

Ava was an excellent female lead complementing a strong male character like Chase. They were skillfully written together and their rodeo adventures were orchestrated with writing perfection.
Ava and Chase were stuck together for long lengths of time in a truck cab driving from one circuit to another.  Just before meeting Ava, Chase decided to swear off women for one month so that he could focus on bull riding and get his career back on track. During this stretch of time, Ava and Chase became the best of friends and their banter and friendship was spot on.

It took a long time in Chasin' Eight

for Ava and Chase to become lovers but this is NOT a complaint. In fact, the relationship developed perfectly and I wouldn’t change a thing.  Their constant flirting, their personal revealing conversations and the support they provided to each other was stellar. After the humour and the affectionate comradely the pair finally do become lovers and nobody writes cowboy erotica like Lorelei James. It’s not just hot sex written on pages, it’s tenfold better. It’s thought provoking, powerful, emotional and so memorable that it blows my mind how each of these books in the Rough Rider series are all different.

and you ride right along with them. Excellent excellent book. There is an amazing story here. I just wished the beautiful cover portrayed Chase correctly. He is shorter than Ava and that’s a major part of the storyline so it would have been great to have that reflected on her amazing cover.

I have book one sitting on my Kobo. I have heard such wonderful things about this series! You can really tell that you enjoyed this book! lol

I have read the first book in the series and must read the rest of this series.