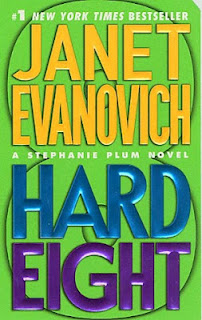 Book Blurb:
Fugitive Apprehension Agent Stephanie Plum has a big problem on her hands: Seven-year-old Annie Soder and her mother, Evelyn, have disappeared.

Evelyn's estranged husband, Steven, a shady owner of a seedy bar, is not at all happy. During the divorce proceedings, he and Evelyn signed a child custody bond, and Steven is demanding the money guaranteed by the bond to find Annie. The money was secured by a mortgage on Evelyn's grandmother's house, and the True Blue Bonds Bail Agency wants to take possession of the house.

Finding a kidnapped child is not an assignment for a bounty hunter. But Evelyn's grandmother lives next door to Stephanie's parents, and Stephanie's mother and grandmother are not about to see their neighbor lose her house because of abduction.

Even though Stephanie's plate is full with miscreants who missed their court dates, including old nemesis and violent drunk Andy Bender and an elusive little old lady accused of grand theft auto, she can't disappoint Grandma Mazur! So she follows the trail left by Annie and Evelyn-- and finds a lot more than she bargained for. Steven is somehow linked with a very scary Eddie Abruzzi. Trenton cop and on-again, off-again fiance Joe Morelli and Stephanie's mentor and tormentor, Ranger, warn Stephanie about Abruzzi, but it's Abruzzi's eyes and mannerisms that frighten Stephanie the most. Stephanie needs Ranger's savvy and expertise, and she's willing to accept his help to find Annie even though it might mean becoming too involved with Ranger.

Stephanie, Ranger, Lula (who's not going to miss riding with Ranger), and Evelyn's lawyer/laundromat manager set out to find Annie. The search turns out to be a race among Stephanie's posse, the True Blue Bonds' agent, a Rangerette known as Jeanne Ellen Burrows, and the Abruzzi crew. Not to mention the fact that there's a killer rabbit on the loose!

Strap on your helmet and get ready for the ride of your life. Hard Eight. The world of Plum has never been wilder.

As for Kloughn, I couldn’t stand him. Annoying is the best term I have for him. When I go back and re-read the books, I jump over every single Kloughn scene.  Actually that could be said about Valerie and her two annoying kids too. I jump over their scenes as well.

I laughed a lot reading about all the different ways that Stephanie tried to capture Bender.  Those are probably the only scenes I do read that have Kloughn in them because it is so funny how the old drunk Bender gets away.

Abruzzi the villain was totally creepy and Janet certainly did not disappoint with her genius plot line. The whole bunny outfit and the antics were really good to read. The kidnap at the end was scary. The snakes and spiders set me over the end of creepiness.

Okay so the best part of Hard Eight

to me was all the Ranger/Stephanie interaction. Hard Eight

is probably best known as the book that they “do it”. The lead up to the sex was really hot and flirtatious. I love how Janet writes him so different than Morelli.  I also like how Ranger took his time to get himself into that position of actually finally sleeping with Stephanie.  At the beginning of the book, it is made clear to the reader that Morelli hasn’t spoke to Steph in weeks which totally removes Stephanie from any misgivings about “cheating” on Morelli. Janet makes a few comments regarding that time period to make it very clear to the readers without actually having to spell it out. For that, I thank her.

Okay so back to Ranger *pauses to compose self* okay Ranger, hot hot hot.  I love how outrightously flirtatious he is with and yet is completely absolved as a “player”. He is not into head games and is very up front with intentions. Sure there are double entendres and such, but he so forth coming.  I love how he plays along with the whole Batman charade that Stephanie has made of him. This line right here spoken by Ranger is one of my favourites in the entire series, “Once you go into the Bat Cave its forever, babe.”*swoons* *melting* The night of passion certainly put a smile on Stephanie’s face and once again I love how Janet somehow manages not to put any comparisons between Morelli and Ranger. She never says who is better at kissing or anything else for that matter.  She is equally complimentary for each man.
The next time that Ranger and Stephanie really talk after their night of passion, I again am impressed how direct Ranger is. No games. He knows that Stephanie and he will never completely be together if Morelli is in the back of her mind so out right tell her that she needs to fix it. He lets it be known, if she waits to long to fix the Morelli relationship, he will be back.  And if the Ranger Morelli camps were ever divided up, they are more divided up now after Hard Eight than ever before.

Ultimately at the end of the book, Stephanie is once again in the arms of Morelli. However, Stephanie now knows that Ranger’s feelings for her go deep as
she is aware that he would literally kill for her.