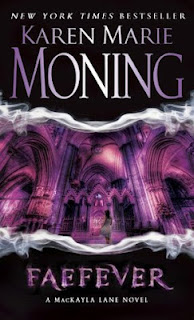 Book Blurb:
He calls me his Queen of the Night. I'd die for him. I'd kill for him, too.

When MacKayla Lane receives a torn page from her dead sister's journal, she is stunned by Alina's desperate words. And now MacKayla knows that her sister's killer is close. But evil is closer. And suddenly the sidhe-seer is on the hunt; For answers. For revenge. And for an ancient book of dark magic so evil, it corrupts anyone who touches it.

As All Hallows' Eve approaches and the city descends into chaos, as a shocking truth about the Dark Book is uncovered, not even Mac can prevent a deadly race of immortals from shattering the walls between worlds-with devastating consequences..

ARE YOU KIDDING ME!?!?!? How can an author possibly like her readers and end a book like that? That's just mean. What a cliffhanger! I'm literally taking 10 mins to write this review so I can go ahead and start DREAMFEVER

. I insist on stopping here to review first because I do not want to mix up the books and since I plan on posting each of these reviews one after the other, they will make more sense and hopefully anyone reading these reviews will understand my flow and reaction to each of the books.*deep breath*

was good. So so good. So much story here. Karen Marie Moning has set up this Fever series to baffle and torture her readers. Well that's my conclusion anyhow. FAEFEVER

was 2009. That's my only explanation for making her readers wait an entire year to read the follow up. Ok enough about my whining and I think you all get I am not good with angst, so let me offer you somewhat of a spoiler free review.

Did I mention how good FAEFEVER

was? Ok cool, you got it. At one point I had to take my glasses off because they were sliding down my nose. Why you ask? Because I was perspiring so badly that's why. Talk about gripping a book!

was an excellent book. I am still a super huge fan of MacKayla, still on the fence about the big mystery man/nonhuman Barrons, still extremely curious about V'Lane (although I really like him), disgusted with Rowena, can't wait to read a lot more about the young sidhe-seer (SHE-seer) Dani and I have no idea how Dublin is going to get out after this aftermath.

That's it. That's all I can give you regarding a book review on FAEFEVER

. Other than I need to add,  IT WAS AWESOME. I honestly think I am cutting this review short because I need to go and start DREAMFEVER

TEASERS - MacHalo, birthday cake, The Voice, a cliff hanger of all endings!

That wait was nothing! From Dreamfever to Shadowfever...now that was HELL! And the birthday cake scene - Holy hell one of the best ever. I can't wait to read your review for book 4. Chapter 4 baby!!! Best. Chapter. Ever!