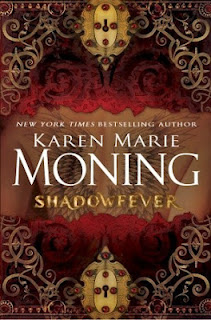 Book Blurb:
MacKayla Lane was just a child when she and her sister, Alina, were given up for adoption and banished from Ireland forever.

Twenty years later, Alina is dead and Mac has returned to the country that expelled them to hunt her sister’s murderer. But after discovering that she descends from a bloodline both gifted and cursed, Mac is plunged into a secret history: an ancient conflict between humans and immortals who have lived concealed among us for thousands of years.
What follows is a shocking chain of events with devastating consequences, and now Mac struggles to cope with grief while continuing her mission to acquire and control the Sinsar Dubh—a book of dark, forbidden magic scribed by the mythical Unseelie King, containing the power to create and destroy worlds.

In an epic battle between humans and Fae, the hunter becomes the hunted when the Sinsar Dubh turns on Mac and begins mowing a deadly path through those she loves.
Who can she turn to? Who can she trust? Who is the woman haunting her dreams? More important, who is Mac herself and what is the destiny she glimpses in the black and crimson designs of an ancient tarot card?

Outstanding!! I have read very few series that I would consider "EPIC". The Fever series based on the MacKayla Lane novels are EPIC. The Fever series are not light reads. They are books that immerse you from head to toe where it no longer matters what's going on around you in real life because all that matters is you that you get to the next sentence, the next paragraph, the next chapter. You need the books as a junkie needs to feed their addiction. That's because you have just become a book junkie to the core. I slept very little and forgot to eat. That my friends is an epic series. It has only happened to me a few times and this past weekend, I had such a time.

. I understood that statement because my all time favourite series Outlander

has never been reviewed by me. I can't seem to do it. I want to but I can't formulate the words to properly do it justice. It may not be the best idea for a book review blogger to admit such a weakness but there is it. For Shadowfever

I am going to give it whirl since I want to put closure on the reviews/thoughts I've held in pending status on my blog for each of the books I've read. Below are more my thoughts rather than a traditional review.

I am sad it is over yet at the same time, Karen Marie Moning has once again left her fans on a cliffhanger by ending Shadowfever

with a classic, "The end..." *click the next page on Kindle* and there it is, "...for now"
I haven't followed up on any forums or stalked out Karen Marie Moning's webpage (yet) to find out what's in store next for her fans but there is a big hint in the Author's Note at the end that says Karen Marie Moning is currently working on a new series set in the Fever world and a graphic novel featuring MacKayla Lane. I hope with all my heart it features Dani.

/Karen Marie Moning did an excellent job tiding up and concluding the epic 5 book series. Moning wove a complicated paranormal world and literally had me gripping the books, had perspiration dripping off my nose and forehead and made me forget to eat. I. Am. Not. Kidding. I occasionally I reached for a banana but only because I was able to eat the fruit one handed. Only one other time I can remember being so involved in a series like that.

The ending was outstanding and I did not see it coming. It was unexpected and I couldn't have asked for a better conclusion. I will not spoil for anyone and I am so happy that my friends never spoiled it for me.

My recommendation to a newbie who is ready to crack open the Fever books is to get them all lined up so you can read one after the other. I was happy that I paused for a moment after each book to complete a review or write my thoughts after each book. For me, the Fevers were one big massive novel so I can't tell you what happened in each book. I can just discuss them as a series. I pity the fans who read them from the beginning and had to wait each year for the new book.

I have the utmost respect for Karen Marie Moning. Her writing is off the chart fabulous as she describes, dialogues between the characters and schemed out her plot lines. She is a storyteller that legends are made of. I can't even comprehend how she created this new world on Earth or what could possibly have been her inspiration.

There are stories within stories but they are neatly set aside as to not confuse the reader. You know where everything belongs and each of the sub-stories are woven into the main story line.

Her characters are memorable. I will never forget MacKayla. I will read hundreds of books after this Fever series and I will never have a slip in my mind with me wondering 'who was that female character from the Moning's series again?' Nope won't happen.

Barrons. Ok, so if you have read my Fever reviews in order I must now add this. I get it. Ok! I get it. He too is epic. I'm a fan. After being rather frustrated with him for almost all of the 4 previous books, I get it. I admire him and there is no one else for MacKayla. No one!

So in conclusion as I wrap up the Fever series, I will say that this one of the best series I have ever read. Top 5 of all time for sure. There are times where I need to make a new rating because 5 out of 5 doesn't do it justice.

Thanks soooooo much for these reviews. The Fever series is one of my absolute favourite series of all time, your right it is EPIC. I devoured them all and there are not enough words to describe my love for them and the genius of KMM.
I am so glad you loved them. If you haven't done so already, KMM made a deal that if Barrons was voted number one in an online Alpha male competition she agreed to write a Sex scene from Jericho's POV and offer it free to her fans. Well no great surprise fans voted him number 1 and so she has posted up the AMAZING scene!!

*Sigh* Oh Barron's my number one book boyfriend!! If I smoked I would have totally lit up after this scene...Enjoy ;)

I certainly did read that new update by KMM. That was one of the reasons that spurred me on to finally read the series. There was so much BUZZ about that Barrons update on Twitter that I just had to see what the big deal was. Well that and so many others that had already read the series. LOL I was beginning to feel out of place or "out of the club" ahahah

I had just actually finished reading DARKFEVER when I read it. Now that was perfect timing!

Thank you so much for the comment. I really appreciate it.

WOOOOOOT! Epic is right. For now, KMM is taking a little break then is working on, exactly what you said. Nothing is for sure, but the rumors are that the new series will include Dani - maybe a few years down the road. I will re-read this series over and over throughout my life and I know I will enjoy it each and every time. I re-read the books in order to get ready for Shadowfever's release and was surprised by how much I discovered this time around. I am actually giddy that you enjoyed these books so much.

Julie, I can't thank you enough for spurring me along. You and my other Andrea really encouraged to read them and I am so glad I did.

Thanks for all your wonderful comments on each of my reviews. You're the best.

I love Monig's Fever series! Wait ... were you not surprised by the twist and turn she threw our way! Seriously had my head turning 360 at the end. Loved this series utterly and completely.

I read the Highlander series first and loved it. I knew the fever series was a much different series so avoided it for a while. I finally caved and read it and was so glad. It is amazing! like you I read it one after another so it does seem like one big book except for Shadow. I had to wait a year and a half with that cliffhanger. (pure torture) As for Barrons, Jamie Fraser is my one true love but Barrons is my evil twin's soulmate.

I am enjoying all your reviews, Thanks
Amanda

Great review. I felt like we waiting forever for this one to come out. But once I read it, I didnt mind. I was just glad it was as good as it was. I loved it and thought it was a great ending for the series. Looking forward to whats next.

This was an awesome review! I felt the same way about this series. It was most definitely EPIC. My all time favorite "book boyfriend" is JZB. I don't think he will be replaced anytime soon. I can't wait for the new series later this year featuring Dani and I so hope that JZB and Mac will show up often.
--Library Lady

TOTALLY AGREE!!! I was soo sad to see it end but now with KMM a sneak peak of ICED I can't wait!!! JZB is one of my fave Charries .. I just can't wait for the story to continue!! I hope o see more of Mac & JZB!!!

Totally EPIC! I agree. I had the first four of the series to read at once and I thought I would die, yes literally die during the two weeks I had to wait for Shadowfever. At was worth the torture.

I just finished this series and it was so good. I can't wait for her to write more of their story :D