Belong to Me by Shayla Black 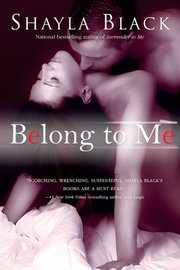 
Belong to Me (Wicked Lovers book 5)


The Wicked Series starts off so, well wicked. Wicked Ties (book 1) remains my favourite but it seems as this series goes on, I seem to either be losing interest or the series is fizzling out for me. In Belong to Me not only does the completely predictable villain reveal itself almost immediately, I was struggling to be interested in Logan and Cherry.


Then there is Cherry. She is now an FBI agent and everyone keeps telling her she is submissive. She is still hurt from Logan breaking up with her right after losing her virginity at 16. Her emotional yo yo personality had me dizzy. She's strong, she's weak. She's submissive, she's a leader. She's tough when she ends an engagement abruptly yet she weak hanging onto unreasonable feelings from her teen years. I yi yi yi.


Logan was to be a Dom yet he constantly had to remind Cherry of that fact. My feeling is if a man is Dom, the last thing he needs to do is constantly remind his sub that he is a Dom. Then on the flip side, Cherry keeps being told she is a sub yet she rarely displays a sub personality. She liked the little bit of bondage Logan introduced to her but that is pretty much where I saw her submissive side displayed and end. At most I see Cherry enjoying a little bit of play in relationship but I can't see her living that lifestyle. I just felt like it was a battle of wits on continuous play.


I was so disappointed with the suspense mystery part of the plot. I kept hoping that the hints that Shayla Black obviously placed were to throw the reader off track and we would be blown away at the end. Not so.


I liked the idea of the FBI sex ring plot. I thought it was a really great idea to have FBI agents to go undercover to bust up a brutal slavery ring. The descriptions of what was occurring sent shivers up my spine and I felt the desperation Cherry felt while anxious to get in there and rescue her dear friend and fellow FBI agent.  It was a risky task and I did admire her for taking on that challenge.

The sex scenes were always strong in this series, but I stopped after the third. Actually I never read the first book. So I suppose I should say I read book two and three and wasn't sold to I stopped. Sounds like this one wasn't overly amazing either. :(

Finally, look at your own hypocracy... "She is strong, she is weak. She's submissive, she's a leader" showing your distaste of her and then "I admire her for taking on that challenge"

Mostly I just want to say thank you for being such a passionate fan of Shayla Black. She deserves it. She is one of my favourite writers. I just didn't care for this particular book.