Addicted to You by Bethany Kane 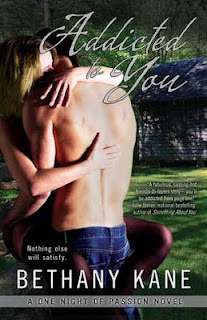 
But Katie Hughes, his best friend’s sister, is not the type of woman to give up on a man like Rill. She blazes into Vulture’s Canyon, determined to save him from himself. Instead, she finds herself unleashing years of pent-up passion. In a storm of hunger and need, Katie and Rill forget themselves and the world. But will Rill’s insatiable attraction to Katie heal his pain—or will it just feed the darkness within him?

Let me first start off by saying I LOVED Addicted to You! From the opening pages, I was hooked. The descriptions are wonderfully vivid, the characters are brilliant and brought to life through flawless dialogue, there’s an abundance of humour, a heaping helping of erotica, and a heart-warming, impossibly addictive love story at its root.

Rill Pierce. You’ll fall in love with the man before you even get a chance to know him. He’s an Irishman (points for that), with sexy, rugged looks (more points), he wears jeans like they were made for him (major points for that), and has a head of hair that you’ll ache to sink your fingers into (infinity points). And Katie Hughes—the headstrong, independent, determined, affectionate, nurturing, glorious Katie Hughes. Her hair is like her personality—wild and reckless and free, but dependable and permanent too.

Following the tragic death of his wife, Rill holes up in a dilapidated house in the hills, drowning his sorrows in whiskey. Katie appears on his doorstep, the vision of an angel in his drunken stupor, and he ravages her like a starving man. It soon becomes apparent that the only person with a memory of their frantic night of passion is Katie. Rill gives her the cold shoulder, demanding for her to leave time and time again, but Katie won’t budge. She stands by him, nurtures him, consoles him, and teaches him how to laugh again (and to love again). She brings him back to life, and gives him a new purpose for living. She makes him crazy—with longing, with fury, with insatiable lust—and he makes her sane.

While Katie charms her way into Rill’s home and his heart, she does the same with the local townspeople. The cast of quirky characters that inhabit the tiny town are all unique and lovable in their own way. From the child-like Errol who happens to find himself under the front wheel of her car, to the stone-cold Monty who can’t help but warm up to her effervescent personality. And then there’s Miles Fordham, whose planned business venture turns the town upside down, pushing one outraged citizen over the edge.


Her urge to settle and make a life for herself in Vulture’s Canyon leads to Katie finding a job—finally a fulfilling one. Rill tells her that he doesn’t have any claim on her life or any say in how she plans her future, but he soon realizes the only definite thing he can see in his future is Katie.

There were so many surprises along the way, particularly the ending. There were so many glorious lines. If I could quote them all, we’d be here for days. Suffice it to say the writing is impeccable. You will NOT be able to put this book down! Addicted to You is addictive in every possible way!