Better Than 8 Fantasy by Erin Jamison 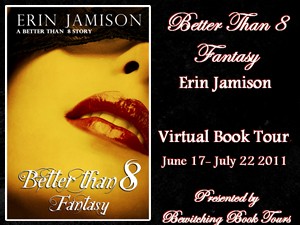 
Published May 27th 2011 by Tadpole Productions


I was provided a copy of Better than 8 Fantasy by the author who requested a fair and honest review.


Amara Simmons has always fantasized about having two lovers but believes it is just that: a fantasy. She likes her men “gifted”, if you know what I mean. At the suggestion of a friend she registers for an online dating website for well-endowed men called betterthan8.com. She believes nothing will come of her site membership but after months of flirting online via email and instant messaging, she’s shocked to discover that she’s fallen for a gorgeous Latin man that has the potential to be her everything – except he never calls and she has no idea why. Nursing a broken heart she is totally unprepared to meet her would-be Latin lover in person much less at the negotiation table of a multi million-dollar real estate deal. In Puerto Rico, passion ignites. Promises are finally fulfilled and the lines of reality blur when her fantasy finally blooms to life. Can Amara have it all: the deal, the man, and the fantasy?


I really enjoyed Better than 8 Fantasy. I giggled my way through the first chapters while reading all the “girlfriend talk”. That’s pretty much how girlfriends carry on. (At least in my world)  I was smiling through the wine induced conversation that turned into the men’s penis size conversation and I wished I could pull up a comfy chair and join them. The idea to have a dating website established for  well-endowed men was a very funny story angle and I don’t think I’ve come across one before. So kudos to ErinJamison for an original idea.


Funny Moment - I also want to make a mention of having the main character Amara driving her car while trying to practice the Bewitched nose wiggle. It had me cracking up. (Mainly because I’ve done it myself.)


Many relationships in this day and age do start out on-line so it was quite believable that Amara had developed strong feelings for Sevastien without meeting him face to face. I also really liked that Amara was usually portrayed in a positive light. Whether it was emphasizing how business savvy she was or her strong morals to not cheat with Adrian (more about him in a second) it was comforting to read that she was a strong able woman if not slightly flawed. Amara’s flaw was Adrian.


Remember in Sex and the City where Big was in love with Carrie but then he turned around and married Natasha? I digress. Well Adrian is the Mr. Big equivalent. Adrian still phones Amara and they mercilessly flirt with each other and Amara needs to kick Adrian to the curb. The reason I like this part of the story however, is because the Adrian and Amara situation is real and is true to life. He is not villainous enough to want to do him harm but he is villainous enough to call him a scum bag. It serves him right for marrying the wrong girl. I like that Amara wants so badly to give into her old flame's desires but yet, sticks to her morals and doesn’t.


Fast forward to when Amara and Seva finally meet, the circumstances were intriguing. I wish the readers were privy to Seva’s POV so that we could know if he was aware that Amara was attending that board room meeting. The readers were treated to Amara’s POV but left wondering about Seva.


Finally, yes finally near the end of the book, the readers were granted Seva and Amara’s highly anticipated romance scene. Unfortunately for me the scene was luke warm. Perhaps it was too anticipated and that the build up was too long. We all read that Seva was 10 ½ inches of manhood and Amara found him on the website for well-endowed men. With the readers having that information, there was barely a mention from Amara’s POV regarding his enormous size. It was like BANG, and then it was over then BANG she was in love. Then BANG Seva has a male lover, Naldo. Oops did I just slip that in? That’s because it just slipped in the book. I was like, ‘what!?!?’ After the initial shock of ‘where did that storyline came from?’, I was happy to accept it. The only issue I had with having a major plot simply slipped in was that it was at the very end of the book and then the book was over. The epilogue kicks in and the book ends. Way to fast and way to abrupt. The good news is that I enjoyed the book so I wanted more. The bad news is that there isn’t any.

In closing I'd like to say, Erin Jamison is an author I am going to watch for. As this was her debut novel, I was very impressed. Very few rookie errors and it was a great read.

If you're willing to give a newbie a try, here are some links.
Here are the buy links:
Amazon

AllRomanceBooks
Posted by Unknown at 8:20 PM