Seven Up by Janet Evanovich 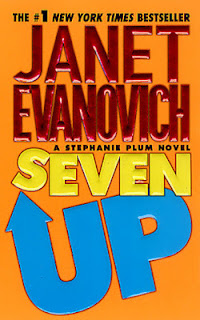 Book Blurb:
BLOWN UP
All New Jersey bounty hunter Stephanie Plum has to do is bring in semi-retired bail jumper Eddie DeChooch. For an old man he's still got a knack for slipping out of sight--and raising hell. How else can Stephanie explain the bullet-riddled corpse in Eddie's garden? Who else would have a clue as to why two of Stephanie's friends suddenly vanished? For answers Stephanie has the devil to pay: her mentor, Ranger. The deal? He'll give Stephanie all the help she needs--if she gives him everything he wants . . .

MESSED UP
As if things weren't complicated enough, Stephanie's just discovered her Grandma Mazur's own unmentionable alliance with Eddie. Add a series of unnerving break-ins, not to mention the bombshell revelation leveled by Stephanie's estranged sister, and Stephanie's ready for some good news. Unfortunately, a marriage proposal from Joe Morelli, the love of her life, isn't quite cutting it. And now--murder, a randy paramour, a wily mobster, death threats, extortion, and a triplie kidnapping aside--Stephanie's really got the urge to run for her life . .

The seventh book in the Stephanie Plum series guided us deeper into the chaotic lifestyle of Stephanie and her family. We finally are introduced to Stephanie’s legendary perfect sister Valerie. Of course what we learn is that Valerie isn’t exactly all the perfect and her two daughters seem a little kooky. To be honest, it is almost as though Stephanie was the normal one in the family now. Grandma described the Plum household as bedlam and it sure seemed that way. Heck, I wanted to get of the heck out of the house myself.

If you are a big Morelli/Stephanie camper, you were mercilessly teased in Seven Up. There was so much talk of marriage, wedding dress outfitting, wedding date setting and even a hall booked. Morelli seemed to be the one all in favour of this wedding idea and Steph seemed to be the reluctant one. Although things are not all what they seem.


Stephanie is a free spirit and having Morelli give her an ultimatum was a big mistake on his part. His Italian temper was getting the best of him. I admire Stephanie for recognizing that no woman should “change” who they are for any man. I need to quote the book here because I think there a few lines that all women should live by. “I might be a stay at home mother someday, but I’ll always be trying to fly off the garage roof. That’s just who I am.” Note to young girls everywhere, stick to your guns and don’t change yourself unless you’re good and ready to change.

Janet was once again changing her Ranger character. Seven Up

was the book that made me realise just how far Ranger has come since “One for the Money”. He was just as sexy as ever but in this book we are treated to expensive loafers, cashmere sweaters and the knowledge that he keeps classical music CDs in his car. I have to admit, I like it! Okay so let’s talk about the “deal” he makes with Stephanie pending his required help to bring in the FTA Eddie. *fans self* Whoa, all I can say is WHOA. Janet is simply genius how she took this story line. The various situations that Stephanie and Ranger find themselves entwined were just so sexy and lusty. *wipes drool off of mouth*

Out of all the scenes that are written, I think the one that I would most want to see on the big screen was in this book. To see Lulu, Stephanie, Maggie and the other wrestler slinging it out in the mud wrestling ring would be priceless. I read that scene over and over and I always have to wipe the tears from my eyes. Of course a close second would be the bitch slapping fight that Grandma Mazur, Stephanie and the other two old ladies get into out in front of Stiva’s. Brings me to tears each time as well. You just have to love the fact that it is Stephanie that ends up with the black eyes and bleeding nose.

We also got to read about Vinnie a bit more as well. I kinda like Vinnie. His character is cracks me up. I laughed that the shootout resulted in Vinnie having a boner. LOL!

Okay, in usual Janet style she is killing me with the cliff hanger. Damn that woman can’t just end a mystery without creating a juicy cliff hanger. What a set up! Ranger sneaking back to Steph’s apartment late at night, (with the reader all completely aware of the deal) then needing a night lite so he can “see her” and then having him remove his belt and then....BAM she ends it! Kinda funny she decided to call the 8th book Hard Eight!
.
Posted by Unknown at 4:01 PM

this is the next one for me to read in the series and I have to admit as much as I love Joe...well Ranger has my interest peaked as well...get it peaked hee hee. Let your mind roam with that one. May have to buy that one for my kindle asap! xo