Halfway to the Grave by Jeaniene Frost 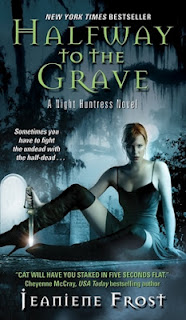 Book Blurb:
Half-vampire Catherine Crawfield is going after the undead with a vengeance, hoping that one of these deadbeats is her father—the one responsible for ruining her mother's life. Then she's captured by Bones, a vampire bounty hunter, and is forced into an unholy partnership.

In exchange for finding her father, Cat agrees to train with the sexy night stalker until her battle reflexes are as sharp as his fangs. She's amazed she doesn't end up as his dinner—are there actually good vampires? Pretty soon Bones will have her convinced that being half-dead doesn't have to be all bad. But before she can enjoy her newfound status as kick-ass demon hunter, Cat and Bones are pursued by a group of killers. Now Cat will have to choose a side . . . and Bones is turning out to be as tempting as any man with a heartbeat.

Just finished Halfway to the Grave

a few minutes ago and above was my exact reaction. Thank God I have book 2 One Foot in the Grave

sitting right beside me.

I have heard the buzz on this Night Huntress series for the past year and I had been putting it off and putting it off. Then I saw an interview with the author Jeaniene Frost and my interest was peaked all over again. I heard that this story was the type of book that when you read the first book you just may as well buy the entire series because you’ll want it. Well good thing I took that advice because I shall pass along to you. Heed my advice people! Buy the books together if you can afford it. Wow I can’t wait to dive into One Foot in the Grave

Cat Crawfield is a half human/half vampire and is the most kick ass heroine I have read to date. She is the queen of awesomeness. Jeaniene Frost has created a female character that is as tough as nails yet just as vulnerable as, well a kitten.  She has some of the best lines in the book.

“You are going to wash your mouth out. If you kiss me, I don’t want a face full of hepatitis.”

“So in other words, a vampire society like Amway and a cult rolled into one.”

Bones, *sigh* Oh Bones is a perfect hero. Alpha yet soft. Confident yet with Cat he is willing to wear his emotions on his sleeve. Handsome, loyal and I totally love that he treated Cat as an equal. He was still protective and worried about her yet he wasn’t all that annoying macho crap that some alpha heroes are made out to be.

Jeaniene Frost’s vampire world is well developed. I like the modifications to the modern day folklore of vampires. When a new world is developed from the mind of an author, I often find holes in their stories. For instance, if they are magic, why can’t they just go 'poof' and make themselves rich. What I caught onto in this vampire world, I'm left with no doubts or left scratching my head thinking that the author didn’t cover that angle. I'm not walking away thinking ‘why didn’t the dude just do this or do that’  When a situation occured where a niggle of doubt could have seeped in, Jeaniene Frost covered it off. Very well edited and very well written.

because I gotta go start One Foot in the Grave

So glad you took the plunge! Be forewarned, all of Jeaniene's books are highly addictive. I can tell you from experience, re-reads are as luscious as the first time. You read fast to get to the parts you love, of course, that's just about the entire book!

Yes I am learning how addictive they are. I am loving them!

this is one of my favorite series. she's got other books that include characters from this series. First Drop of Crimson (Spade and Denise) & Eternal Kiss of Darkness (Mencheres and Kira) and then later this year she's going to have one with Vlad.

What a great review I love these books cat and bones are so great!
I started by reading the first and had to go buy all the rest and love them all! Im so glad that I found her books such a great story :)